Of the three sites, 487 Fourth is the most troubling.  Plans were first filed for housing here in 2011.  In 2014 the city property was formally turned over to Mercy Home Housing.  Community Board 6's newsletter Sixth Sense included details of the housing plans:

Congratulations Sister Kay Crumlish, and the entire Mercy Home family! It's been nearly 2 decades in the making and on February 5th, they finally closed on the HPD property at 12th Street and 4th Avenue. This former community garden site will be developed as a home for 8-10 frail developmentally disabled adults and will include space for a future community garden too. Win-win.

A banner went up at the site: 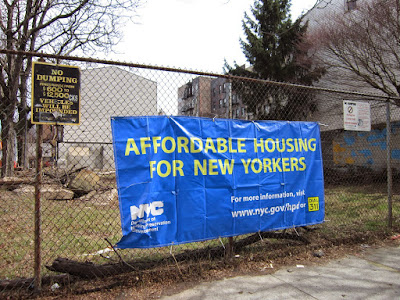 Since then, little has happened.  The site was cleared but no excavation/foundation work has taken place.  Work in Progress signs are gone, along with the green construction fences.  A new, chain-link fence has been erected.

One strange quirk is that there are three addresses involved with this site. One, 220 Fourth, was shown on a sign in 2015, in more promising days (see below). 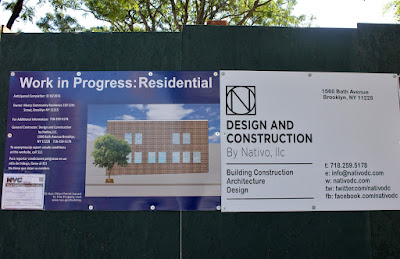 But if you type in this address at the DOB, you find this:

If you type in 487 Fourth, the number listed on the affordability map, the records stop in 2014.  The most complete records can be found by typing in 215 12th, an invalid address that the map situates a block down on the other side of the street.  Go figure.

There are so many mysteries here.  Without an official explanation re the delay, here are several on-the-street stories I've been told.

1.  A dispute with an adjacent property on Fourth Avenue caused lengthy delays.

2.  The ground is contaminated.  (There was a gas station here in earlier years, and after it closed a community garden was established.  The garden was eventually closed because the site was (ahem) toxic.)

3.  Mercy Homes has run out of money for construction.

I would LOVE to see more affordable housing on Fourth Avenue, and I would LOVE to see the housing at Fourth & 12th completed.  Just what's happening here? There's a critical shortage of housing for disabled youths who age out of the system at 21.  Many end up languishing in group homes far from their families, often housed with residents considerably older than them, and with few recreational opportunities nearby.  Even in the best of circumstances, housing for kids like these can be inappropriate.

If building at 487 Fourth is completed, that will make 54 new units of affordable housing created on Fourth (9th through to the 30's) since 2014.  We'll take what we can get, but weighed in the balance, how does this number compare with units lost - the small three-families lost along the avenue to luxury housing, and others on side streets peripheral to the action?  Of course, prices would have risen around here with or without the explosion of new housing on Fourth, but the "reinvention" of Fourth, with an initial rezoning that included no mandates for affordable housing (a mistake since acknowledged by local pols.) had a huge impact on the area - decreasing diversity, rapidly inflating housing prices, overcrowding schools and public transportation, overburdening a creaky sewage system, & creating a bleak, inhospitable streetscape.  And little gained in the process.

At the Fourth and 12th building site, a vestige of the old community garden (2016)
Posted by onemorefoldedsunset at Monday, March 05, 2018