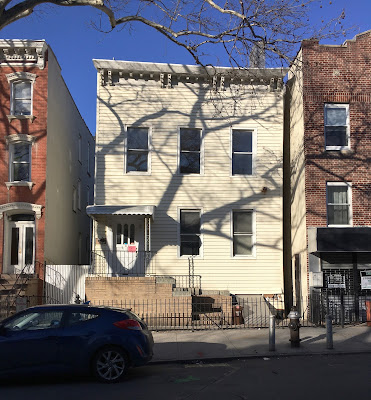 Too many.  I've fallen far behind in trying to account for the wooden houses that are disappearing round here.  It's strictly the luck of the draw these days.  257 13th, just below Fifth Avenue, has just received its marching orders, with no indication yet of what's to take its place.  It's a pre-1880 building.  In its early days, news of its inhabitants indicate a genteel residence.  "Progressive euchre" card parties & birthday celebrations get mentions in the Eagle.  A recital notice appears in 1891,

and in August of 1893 we learn that the same Professor Simpson is vacationing in "the Orange Mountains."  A Simpson with a different first name writes in to the Eagle a couple of years later to express his thanks to neighbors who took his family in when a fire broke out on nearby Fifth Avenue. 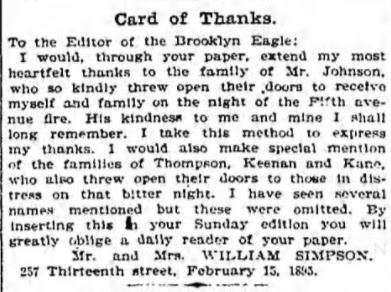 A rental listing from 1901 suggests quiet tenants are required.

It's not clear how long the Simpsons lived at 257. There's a doctor's office at the house by the 1930's.  In 1938 an ad is placed in the Eagle for a white housekeeper (sleep-in).  A sour note.  Around this time there's a beauty parlor on site as well.  A good name & a job title here, and a frisson of allure.

In 1944 a doctor at this address is suspended for involvement in a Workers' Comp. kickback racket.  Perhaps the propriety is fraying at the edges.


Posted by onemorefoldedsunset at Tuesday, March 27, 2018