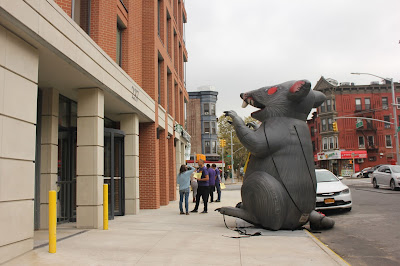 The Rat was Back at 237 11th yesterday, during Open House hours for would-be renters at the new Adam/America/Slate apartment building on Fourth Avenue.  Members of 32BJ Services Employees International Union CLC were there to protest the recent dismissal of Luis Torres and Ivan Fajardo, who had worked as doormen at the building.  According to the union, Torres and Fajardo were fired shortly after delivering a petition demanding the right to state-mandated wages, and benefits: 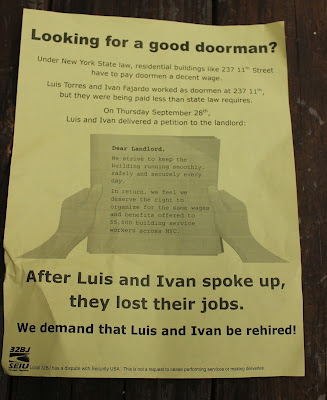 Two years ago, the rats were present at another union protest:

The inflatable rats are out at 470 Fourth Avenue, the Adam America development at Fourth & 11th, where union members are campaigning on behalf of laborers at the site in their drive to unionize.  Laborers report low wages, unfair dismissals, harassment & unsafe working conditions while working for the Red Hook Construction Group, builders at the site.  Since laborers at 470 threatened to unionize, RHCG has allegedly raised their pay, and offered a 401K plan, & sick days, but workers still feel vulnerable & poorly represented without union support.  They will be voting to join LiUNA Local 79 (Construction & General Building Laborers) tomorrow, at the RHCG yard at 121 12th Street, from 4:30 am to 6:30 am, and from 4:30 pm to 6:30 pm.
(One More Folded Sunset)

237 11th is winsomely described on the building's website as "tucked away in the cool backwinds of Prospect Park."  A Streeteasy/Citi Limits listing blurb describes it as a place where "culture and accessibility converge."  The rents for units currently available on Streeteasy range from $2,246 for a studio to $6,646 for a three-bedroom apartment.

Adam America/Slate are active developers on Fourth, and have also bought smaller multi-family buildings in the neighborhood.  The construction at a nearby rental building at 535 Fourth has been stalled by building violations, which necessitated the removal of several floors.  Last year debris fell from the building during heavy winds.  There is still a partial SWO in place at 535.  Directly south of this site, at 541, the developers assembled a parcel of eight contiguous three-story three-family apartment buildings, which they are replacing with a 130-unit luxury rental building. Other projects on Fourth include a condo building at 24 Fourth (formerly home to the Church of the Redeemer) and a condo building at 251 First, which was completed in 2016. The Real Deal has also noted that Adam America/Slate were involved in the controversial purchase of the Rivington House nursing home:

Slate and Adam America are among Brooklyn’s most active residential developers. One of the pair’s recent acquisitions, the Rivington House, made headlines after the city and the state began investigating seller Allure Group for allegedly misleading the city over the lifting of a deed restriction.

310 12th Street, a small, 20-unit apartment building was purchased by Slate Properties in 2014 for $5.75M.  The building was the subject of an investigation by State Attorney General Eric Schneiderman. Violations issued at the building during 2014 and 2015 included material false statements concerning rent-stabilized apartments.  Slate sold the building in 2016 for $9.2M.

Luis Torres and Ivan Fajardo deserve their jobs back, along with fair wages.  Contact your local politicians about the situation, and ask them to support the rights of local workers.

Posted by onemorefoldedsunset at Sunday, October 15, 2017