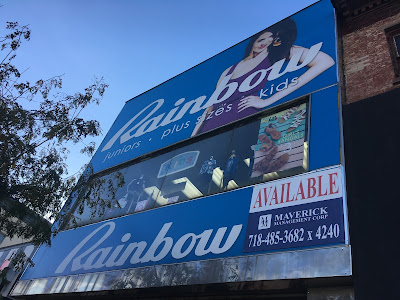 The Rainbow budget clothing store at Fifth & 14th is up for lease. The New York chain was founded in the 1930's, and later went national.  There are around sixty Rainbow stores in the city today. This part of Fifth, like Fifth in Sunset Park today, had plenty of discount chain stores in the 80's and 90's, along with the smaller family mom and pops.  Most of these chains were local to the New York area. Today the chains along here are mostly national banks and gyms.  Close to Rainbow, Mandee, Fabco, and Petland Discount, all chains with New York origins, are still around.  The co-founder of Mandees, Bernard Mandelbaum, grew up in Park Slope, where his mother ran a candy store.

Shopping patterns, and economic demographics have shifted considerably round here in the last couple of decades. The ad for the Rainbow space describes the location as a "well-established growing shopping district." For more on the chain, including some early 1940s pics. of a Rainbow store, read here. 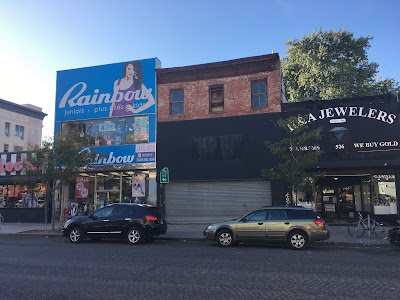 Posted by onemorefoldedsunset at Friday, October 20, 2017