Why are State Troopers now patrolling Fifth Avenue?  They were out on Fifth yesterday, much to the concern of passers-by, and I saw them pulling over a black woman driver, for reasons unknown. Prior to this, they'd been double parked a couple of blocks farther north.  When I asked them why they were there, one of the troopers told me that Cuomo was sending state police out to "help the city." I asked her why they needed to be here on Fifth - hardly a hotbed of crime - & she asked me if I'd been paying attention to the news.  Well, there's a surplus of news to pay attention to right now, with most of it far more serious than the endless Cuomo/DeBlasio feuding, and I couldn't say I'd heard anything about a state police initiative in NYC.  I wanted to try and find out more, but our conversation, such as it was, was abruptly halted when the two troopers turned on their lights & sped off to stop the driver I referred to earlier.  She was allowed to drive away after a few minutes.

I can't recall ever having seen state police working round here before. 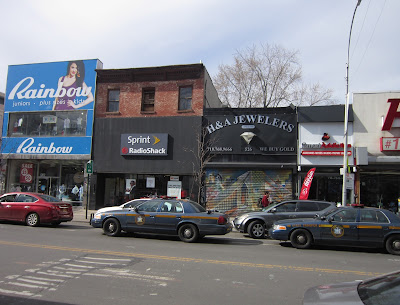 Posted by onemorefoldedsunset at Monday, February 20, 2017

There are three state patrol cars parked at the entrance of the Battery Tunnel. Also have seen them on 5th Avenue and Prospect Expressway