Green-Wood, Through the Fence on Seventh 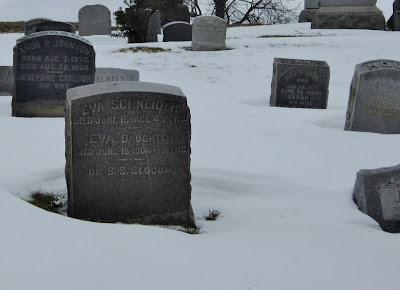 I've walked along the side of the cemetery here countless times, but I never noticed this headstone until yesterday.  Eva Schneider, 42, and her daughter, also Eva, both perished in the SS General Slocum fire of 1904.

Only 321 passengers survived from a total of 1,358 passengers. The final death count totaled 1,021. The next largest death toll in the United States would come decades later with 2,974 dead from 9/11.
There would be miracle stories of survivors for the lucky few and heartbreak for those who lost loved ones. It was widely reported that Captain William Henry Van Schaick would not bring the ship to shore for insurance reasons. Instead, Van Schaick steered the burning ship to North Brother Island. Van Schaick would testify that gas tanks and lumber yards made landing near 130th Street, close to the Bronx, dangerous.  (New York Public Library)

Posted by onemorefoldedsunset at Sunday, February 12, 2017