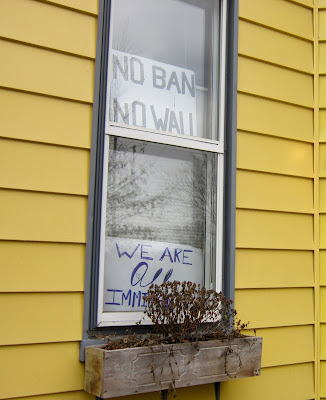 Here’s why El Chapo isn’t being held in Brooklyn (Brooklyn Paper)
Security issues both above & below ground apparently:

... Sunset Park sits atop a squishy mix of dirt and rocks deposited there by a glacier 15,000 years ago — not the tough-as-nails bedrock that Manhattan sits on, according to a local geologist.
“Manhattan bedrock extends into Brooklyn, but that’s up more toward Flatbush Avenue Extension,” said Brooklyn College chief geology lab tech Guillermo Rocha.
The earth beneath Brooklyn’s jail at Second Avenue and 30th Street — a two-minute walk from the Gowanus Bay — is all “sediment and boulders,” he said.

Betting On De Blasio's $2.5 Billion Streetcar Paying For Itself Is “A Recipe For Disaster"(Village Voice)

... a Voice investigation of the economic studies underpinning the streetcar’s finances, along with interviews with development and transit experts and the project’s planners, finds that the city’s contention that the BQX would pay its own way relies on untenably optimistic assumptions and creative bookkeeping. For the financing plan to work, say those who’ve studied similar projects elsewhere, the new streetcar would have to single-handedly spur the wholesale redevelopment of a waterfront that has already been significantly redeveloped — and if that failed to occur, the city could end up footing the bill.

Mayor Bill de Blasio, Brooklyn Borough President Eric Adams, state Sen. Jesse Hamilton and several other local politicians have hosted fundraising events at a controversial restaurant that felons operate and that owes hundreds of thousands in unpaid city, state and federal taxes, court and city records show.
The operators, twin brothers Robert and Zhan Petrosyants, pleaded guilty in 2014 in Brooklyn Federal Court to a money-laundering scheme. The twins are part owners and operators of three Brooklyn restaurants, including Woodland, a Flatbush Avenue restaurant and nightclub that has drawn the ire of neighbors over the past several years for loud music and rowdy patrons, court records show.

Superheroes Are Being Recruited Into The Anti-Trump Resistance (Forbes)

A project to document the daily lives of Britons celebrates eight decades. As William Cook discovers, Mass Observation began in 1937 with a bold experiment to take the pulse of a nation. A generation later and the public still continue to share details of their lives with unsparing honesty.


Posted by onemorefoldedsunset at Friday, February 03, 2017