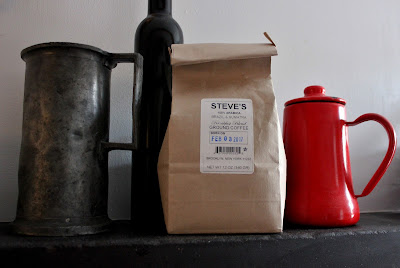 I was happy to notice today that Steve's C-Town, on 9th Street, is now stocking locally roasted coffee beans.  When I saw the zip-code on the coffee packet, I guessed that the supplier might be Gillies Coffee, in business since 1840.  And I was right.  Originally based on Washington Street, in lower Manhattan, Gillies eventually moved to 19th Street in Brooklyn, between Third and Fourth Avenues. In 1999, Donald Schoenholt, president of Gillie's, spoke to the NY Times about the shift of several coffee businesses to Brooklyn, when a major container port opened on Third:

''The largest roaster in the community is Chock Full o'Nuts, which has a major roasting plant on Third Avenue,'' Mr. Schoenholt continued. ''There was also, until a month ago, the largest trade roaster in the United States, Harry Wolfe & Son, located at 383 Third Avenue. They recently closed their doors after about 100 years ...There are many smaller firms, five or six that I can think of offhand, all within this general area, of which mine is one.''
Most roasting plants around Gowanus and Park Slope are concealed in anonymous brick buildings, and Mr. Schoenholt said modern roasting equipment releases no smoke. ''100 years ago a coffee roasting factory would belch heavy, oily smoke,'' he said. ''Now all you see is the occasional cloud of steam. But the aroma is all over. Sometimes as I'm driving in to work, I can tell what part of the week's roasting we're into, French roast or espresso.''

I love buying local, and am especially happy to buy from a company like Gillies, with such a long and prestigious history. I'm reminded of a happy time in the 1970's when I visited Dublin and got to stay with the Quaker Bewley family - longstanding coffee and tea importers - who showed me the true, simple way to brew their products.  It involved an earthenware jug, a strainer, and an alarm clock.  No tricks. I love good coffee - I lived in Rwanda for a couple of years and enjoyed the best arabica beans I've ever tasted - but I just can't stand the faux-mystique & high prices of today's Emperor's New Clothes coffee scene,  There are any number of upscale cafes in the area these days, with earnest pour-over artists doing their thing, and a fresh crop of roasters have recently settled in Gowanus & Red Hook.  Best wishes to them, but they're out of my range, I'm afraid.  Give me the real deal at a fair price, and I'm happy. Thanks Gillies & Steve's.


Posted by onemorefoldedsunset at Monday, February 13, 2017