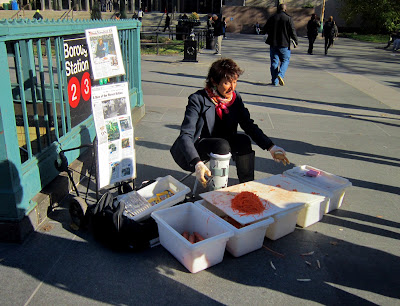 Happy to run into Ruth Ades Laurent at the Borough Hall greenmarket last week,  For many years Ruth's father, Joe Ades, who died in 2009, was regularly found at the fringes of the Union Square & Downtown Brooklyn markets, selling just one item - a Swiss vegetable peeler.  Ades was unusual on many counts: a classic English street grafter on the streets of New York City, who dressed in fine suits, just happened to live on Park (with his fourth wife), and liked a nice glass of Veuve Cliquot at the Pierre.  That patter really got him places.

When Ades died, his daughter Ruth inherited a huge haul of peelers.  Having grown up in the trade, with her father, she started selling them herself, on her fathers own turf, with her father's old sales pitch.  Word for word.  I saw her a lot at first, but not in recent years.  I thought maybe she'd sold all the goods, or maybe I was hitting the markets on the wrong days.  She said she'd started back at this location in September, but I wasn't sure how long she'd been away.  At any rate, it was good to see, and hear her again. The patter hadn't changed, and as usual, she'd drawn a small crowd. I couldn't help joining in, endorsing the product - you had to get one, it really worked!   Five dollar bills steadily changed hands.  I told her how much I enjoyed hearing her, and she said the art was straight-up Petticoat Lane. She was one in a long line of patterers, and I heard in her voice the markets I'd grown up with as a kid, much livelier affairs than these tasteful & restrained greenmarkets.  Good food here, but not much in the way of action. I missed the art of the deal, the boasting, the flattery, the cheek, the laughs. All to show them that unbelievable bargain.  All to get them eating right out of your hand.  I bought a peeler too, in memory of her dad. I was a soft touch, and I didn't mind a bit.

Update. I inadvertently deleted a comment from a reader before it got published.  I'm sorry about this, but here's the gist of what was written. Q. What's the particular brand of peeler Ruth Ades Laurent sells, & how can one get in touch with her?  A. The brand is Star.  If you can't find a Star peeler, you should be able to find something similar in a good kitchen supply store, but make sure it's Swiss -made.  It shouldn't be more than a few dollars. I don't know Ruth's schedule, but I guess she might go to the Union Square market too, though I've heard it's hard to work there without a regular permit. Perhaps one of the stall-holders at the Borough Hall market might know how to contact her?


Posted by onemorefoldedsunset at Tuesday, November 22, 2016