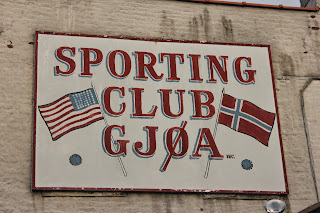 On the Bay Ridge/Sunset Park border three venerable Scandinavian sports clubs are hanging on.  On 65th Street the Danish Athletic Club and the Swedish Football Club are close neighbors.  On 62nd Street there's the Norwegian Sporting Club Gjoa.  The Danish club was founded in 1892, in Red Hook, and moved to its current location in the 1940s.  You can dine here as a non-member, though on Saturdays the club is closed for party rentals.  I recently made the novice's mistake of turning up on the wrong night, but plan to return soon for a meal.  Lost City blogger Brooks of Sheffield paid a visit there a year or so back for his Eater Who Goes There? series. It's a great post, well worth checking out.  Earlier this year the Times ran a piece about the place too, focusing on the club's relationship with the local Mexican community. 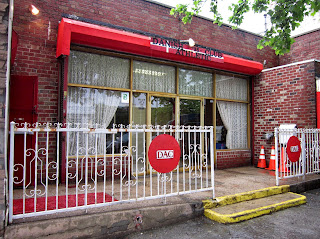 I don't know much about the Swedish club, but it seems to be still active.  I think it's been around since the 30s.  I did find a Swedish film clip of a visit to the club several decades ago.  Appreciating it fully without a knowledge of Swedish is a bit tricky, but you can still enjoy the streetscape, the inside shots of the club, and the lively summer festivities out back.  And you can at least try to imagine what's being said.  The boisterous lady at the end of the film is very expressive.


The Sporting Club Gjoa was founded in 1911, and still has a successful youth soccer program. Regular membership numbers are scant though, as they are at the other two clubs.  I hope all three associations can gather enough support and community investment to remain in their old sporting grounds for years to come, and keep some of the old cultural traditions alive, even as the area's demographics continue to shift.  These places are a proud & important piece of city history. 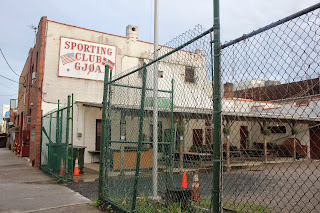 Posted by onemorefoldedsunset at Wednesday, May 28, 2014