No sales this time. This week, let's turn to our developer neighbors, who have been working in fits & starts next door since last winter.  It's been a merry whirl of stop orders, subsidence, fenceless construction sites, foundation work by flashlight, foundations laid over our property line, repairs promised but alas, never actually made.  Now all has gone quiet.

With nothing much happening here, we'll head south, where our friends are pressing on valiantly with their pillage enhancement of the neighborhood. On 20th Street, they're working on two apartment buildings - one on either side of Sixth. Of course, each building is owned by a different LLC, but they share (along with our adjacent hole in the ground) the same owner address and phone number. 318 20th is a double lot (318 &320), and was picked up in late 2012 for close to a million dollars.  Going up is an eight family four-storey-plus-penthouse building. 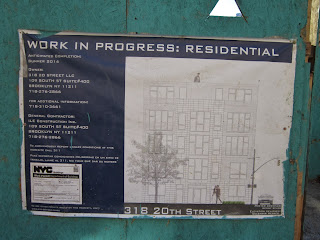 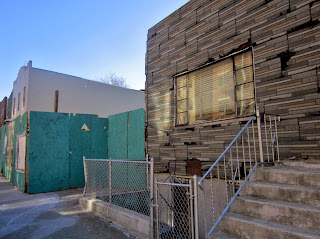 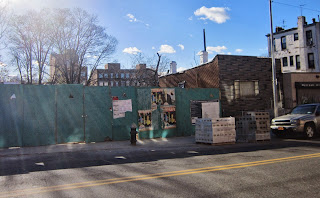 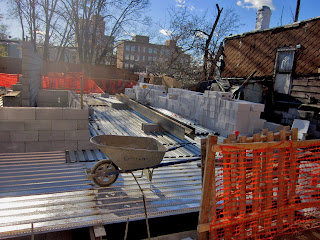 Work at 318 has got further along than next door's, despite, at one point, a stop-order, and all-too familiar complaints for unsafe worker conditions, after-hours construction and the like.

On to 298 20th Street.  I really need some advanced real estate know-how to unpack the flurry of transactions concerning this address in late 12/early 13 (see ACRIS here), but two deeds of sale on 8th November 2012 involve a sequence of Party 1 William C. Thompson (father of the would-be-mayor) as Referee, to Party 2 (Gamoto Enterprises) for $420,000 and Party 1 (Gamoto Enterprises), to Party 2 (UV Properties) for $370,000.  On the DOB website Gamoto Enterprises LLC are still listed as owners as of last month, though 246 Quincy Street LLC are the owners posted at the lot: 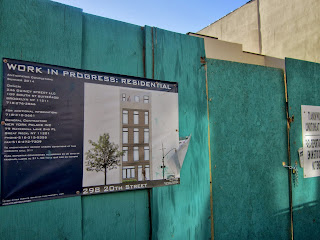 Really, this one just gives me a headache.  In 2010, IMBY wrote about 298 and two other properties caught up in an affordable housing debacle involving Just Homes LLC, and I could do with some IMBY expertise to explain how the story has continued.  Certainly the City's still involved as Gamoto (listed as Gamato) has a $580,000 mortgage from HPD.  Anyway, let's turn to more practical matters.  How are things going for Gamoto/Gamato/246 Quincy Street LLC/The Neighbors viz-a-viz construction?  Not too well, I'm afraid. Work on the four-storey-plus-penthouse is stalled right now, with a partial stop-order in effect: 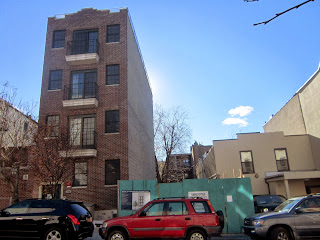 The projected completion date for work at 318 and 298 is summer of 2014.  We'll come back and take another look as the months roll around.

Update:  Workers reappeared next door this morning!
Posted by onemorefoldedsunset at Monday, December 02, 2013

Hi - my family and I are looking into renting an apartment near the 298 20th street construction site. I came across your blog in my research on the project - any updates since you're most recent post?

This is all a little disconcerting!

Sorry, I don't have any updates. I'm pretty much an amateur with respect to this stuff. However, if you're thinking of moving to a new building, it's always a good idea to look at the Department of Buildings website for its construction history. Many of the blocks around here have dubious construction going on, and of course this can be an issue, especially if you're an immediate neighbor, but a lot of people aren't much bothered by development concerns. Good luck!

Wish I had squatted 455 18th St 10 years ago. I could probably be the legal owner by know. I hate this for profit affordable housing schemes giveaways to well connected "developers." Bring back sweat equity and squatter's rights.