Back in 2012, the guys at Danny's Rim & Tires downsized, and talked of plans to rent out the corner space at Fourth & 11th.  Though there was pressure to sell to developers, they were planning on staying put, albeit in a smaller space.  Happily, though the condo boom continues on the avenue (with a huge building coming right across 11th), Danny's is still around.  I don't know how seriously the rental plans were moved along, but anyway, the place stayed empty for over a year.  This morning I saw tell-tale brown paper and permits up on the windows, and enquiring at Danny's after work, found out that there'll be a bagel store there soon.  This will be a useful addition, and a pretty smart idea for the location, with the subway station so close .  If the bagels are any good, I know I'll stop in on my way to the train.  The perfect deal would be a Bagel Hole II, bringing the city's finest bagels & bialys to Fourth, though this is merely fantasy.  At least let them not be fat, doughy, oversized affairs. 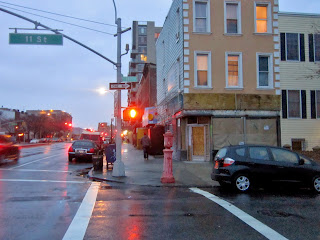 
And here's Scooby, king of the tire shop, who passed away earlier this year. RIP. 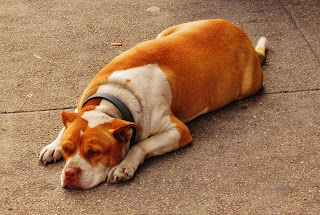 Posted by onemorefoldedsunset at Friday, December 06, 2013