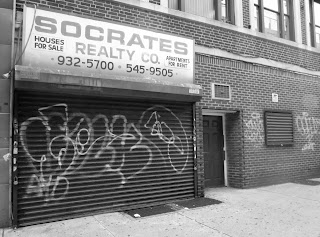 Well it sure beats Brown Harris Stevens or Corcoran. Astoria has many charms, but surely the mantle of classical greatness worn by even the humblest business is its most delightful.   If you walk Steinway, 31st, or Broadway, you walk with the Ancients, and even a trip to the deli or the cleaners takes on epic proportions. There's a comedy coming out later this year in which the Greek gods are alive & well in modern New York. Gods Behaving Badly. Christopher Walken plays Zeus & Sharon Stone is Aphrodite. It sounds kind of crass, but I like the concept.  Apparently they're living in a city brownstone, and I bet it'll be a Manhattan address, but really - come on. Where else would they set up home but right across the river in Queens?
Posted by onemorefoldedsunset at Tuesday, October 08, 2013