On the Way to the Temple 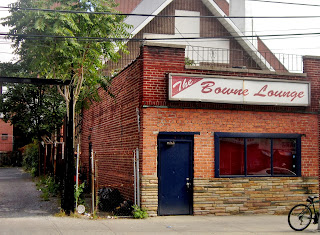 A quiet Queens row of staples. The Bowne Lounge, Beijing Style Barbecue, Bowne Laundromat, Merci French Cleaners (or its ghostly remains: French Cleaners becomes King Fu school), Laati Liquor & Wine.  The church behind them is a nice touch. I  generally avoid those Yelp-style reviews, but this one's got a lot going for it:

"Characters is being nice, theres a real loud redhead who's voice could cut through glass.... She seems like a regular,, who kept playing love songs hoping this guy would pay attention to her,I only wished as i was sitting there this biker guy would pick her up, just to get her out of there..She then went out the back door to smoke well you know..... its not a nice local bar, its only for regulars, who make you feel unconfortable anyway.... much better places to be in flushing" (Insider Pages) 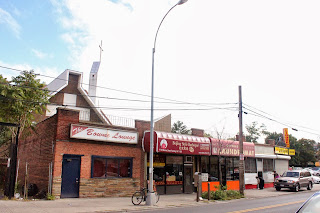 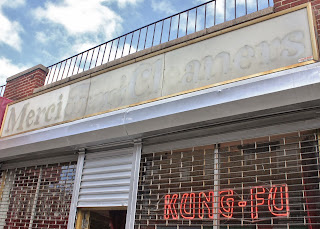 Posted by onemorefoldedsunset at Monday, October 14, 2013