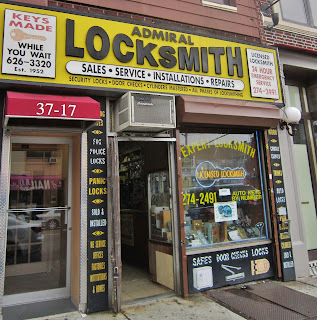 Admiral Locksmith, around since 1952. I like the painted safe, door-check and lock at the base of the storefront, & those panic locks & Fox police locks signs.   There's a great profile of the owner, Roz Kaplan, in the Huffington Post. This is one in a series of "Astoria Character" pieces written by Nancy Ruhling. And for more on lock inventor Emiel Fox, and Arlene Skratt, who along with her husband Gene ran the Chelsea Fox Police Lock Company until 2002, check out this 2008 NY Times piece:


"I never lived in Manhattan, but people who lived there used to feel more secure with one of those locks. Every once in a while you see the lock in a movie. It was very secure. I don’t think anybody ever broke into an apartment that had one of those police locks. Nobody sued, anyway ...

When Gene died, there was nobody left to run the business. My son wasn’t involved in it that much. His father never really taught him the business. You had to know where to buy your steel, where to buy your cylinders. You had to have your contacts. My son didn’t know much about all that. And my daughter wasn’t interested in manufacturing a lock. My son and daughter have dismantled the shop and are renting it out to a psychic. I guess everybody wants to know what’s going to happen. Until the day they die. They don’t want to know that."

Lavelle's Admirals Club. Closed when I was passing by, at the wrong time of day. 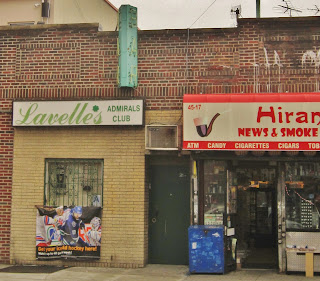 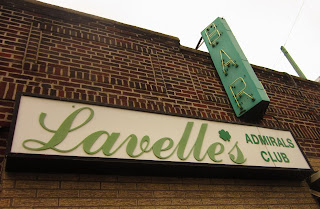 Posted by onemorefoldedsunset at Thursday, May 16, 2013