On & Off the Train 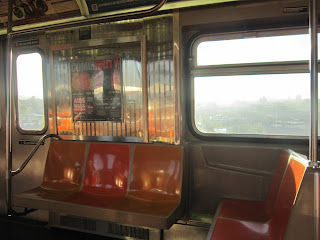 At least it's light when I get up now. This pushes me out of the house earlier than in winter hours. I like to be able to take my time over the trip to work, often breaking my journey by getting off the train at different points along the way, grabbing a coffee, and breathing in a piece of the morning. It's a ridiculous way to treat a commute, but then, the commute itself is pretty absurd and I like to defeat its numbing routine. I usually get off the F somewhere in Manhattan, but have now started getting on the first train - F or G - that arrives at the station. While the F can often be crowded even by 6:45, and stay that way as far as midtown, the G has not yet hit rush hour mode. I like the old orange, two person seats, because you can sit next to a window, and I like listening to a real voice announcing the stops. The G train choice involves switching to the E and then the F, but it runs about the same time as the three borough ride.  I've been getting off at Court Square or 21st (easy for the G switch), but I guess I should get more ambitious.
Posted by onemorefoldedsunset at Saturday, May 11, 2013