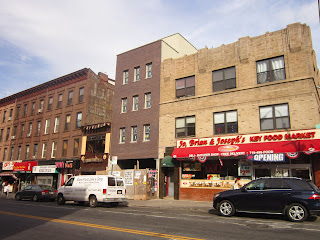 With scaffolding down, a standard four storey plus penthouse is revealed at 491 Fifth, between 11th & 12th.  Until several years ago Tacos Nuevo Mexico was at this address, before it moved next door, and earlier, in the mid 80s there was a store named Get Even at 491. It's quite likely that the 491 & 489 buildings, smaller and shallower than their neighbors, were the original wooden structures built here when this neighborhood was first developed. 491 didn't show obvious signs of its vintage in recent years, but 489 (home to Glasgow Deli when I first moved round here) still has its cornice, and that look of an older building dwarfed by newer arrivals: the row of brownstone apartment houses, and now, our latest architectural wonder.  I don't know the date 491 and 489 went up, but my 1886 Robinson street map shows two wooden buildings here, and lots next to it were vacant.  In 1886 almost the entire block around the corner on 12th  still consisted of frame dwellings.

You can see 80s tax photos of Glasgow & Get Even here. The adjacent Jo, Brian & Joseph's Key Food Market (formerly the OTB) opened a year ago, but is still celebrating its grand opening! The faded ad overlooking 489 is a bit harder to see with the new apartment building nearby, but happily it's still possible (for now) to make out at least part of J.J. Friel Loans.

Update: If you want to know more about J.J. Friel, there's a fascinating piece about the business and the family behind it over at Frank H. Jump's Fading Ad Blog.

Posted by onemorefoldedsunset at Monday, May 13, 2013