At eight thirty, the sidewalks gleamed in the streetlight, and I realised I'd missed rain. By the pentecostal church, I heard a man singing.  His voice was frail, but the song itself had a tubthumping bounce.  Through the front door glass, I saw our singer, a gray-haired man in suit & tie, and in the pews, an audience of one. 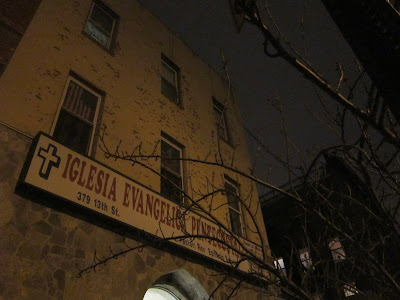 A couple of avenues down, I saw the barman at Lucky 13 looking out into the night. I remember when he worked at the comic store on Seventh, and led a double life in my son's own comics, as the comic store clerk Oswald. Sometimes, in later years, when I left for work very early in the morning, along an almost deserted Fifth, I'd catch the light on at Timboo's, and see Oswald engaged in pre-dawn bar duties.  Half-drunk with sleep, I 'd feel as though I'd mislaid completely the line between fact & fiction.
Posted by onemorefoldedsunset at Friday, December 21, 2012