The Bread and Puppet Theater will be celebrating their 50th anniversary next year. Originally based on the Lower East Side, the company, founded by Peter Schumann, is based in Glover, Vermont. Bread & Puppet make a regular appearance at Theater for the New City this time of year, and this season, along with an under-12 kids' show, they'rel be offering a double-bill: The Possibilitarians & Dead Man Rises (Dec. 6 - 22):

The Possibilitarians, a play with live music and giant puppets, addresses present day occupiers, uprisers, and possibilitarians to learn from the 17th century diggers and levelers, and to start digging and leveling and opposing and countering the crumbling economic system and its inherited misrelation to Mother Earth, and to re-educate the disemployed hands & feet of the machine-age! Dead Man Rises is a fairytale-like life-size puppet show originally created by Bread & Puppet in the mid 60's, most notably performed as part of the student occupation at Columbia University in New York City in 1968. Performed by director Peter Schumann and the Bread & Puppet company, along with a large number of local volunteer puppeteers and musicians.

I haven't seen a Bread & Puppet show in years. I took my son to a "nativity" play there in the 90's (great show), & both my kids went on a trip to see them in Glover (in an almost-roadworthy VW van driven by my husband's Polish godfather). Time to go back & enjoy some old-school political theater. Certainly beats those Rockettes. 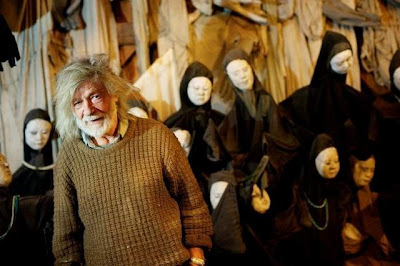