A while back, I was looking at the WPA Guide to New York City - specifically the section on Sunset Park - and wondering how I could find out more about surviving Scandinavian cultural institutions there.  Today I discovered the website of the Scandinavian East Coast Museum (formerly the Norwegian American Collection in Brooklyn). The museum, based in Bay Ridge but largely existing in an online capacity, is hoping to establish a permanent site, and is raising money for this project. It's a great resource if you're looking to explore Scandinavian-American history in Brooklyn:

Many people remember the days when Trinity Lutheran Church on 46th St. and 4th Ave.in Brooklyn had 1,000 children in their Sunday School. Many people regret the loss of Eighth Avenue as the main Norwegian thoroughfare, known as "Lapskaus Boulevard", which thronged with Norwegian stores and restaurants. A Scandinavian community has existed in the Sunset Park, Bay Ridge and Dyker Park communities for over 300 years. The Norwegians physically and spiritually built these communities and built them to last.

Online you can check out a fascinating street map of Lapskaus Boulevard, with its businesses listed in detail, and see old photographs of the neighborhood. The museum also covers Scandinavia-related local news & has a calendar of current events.  For $12, you can become a member, and help support fundraising efforts. I'm signing up right away.

"Good-bye to the old home--Among the 18 persons who left the Danish Home for the Aged, 1055 41st St., to live temporarily at the Odd Fellows Home, 194-10 109th St., Hollis, Queens, were left to right, Mrs. Josephine Petersen, 84, Mrs. Elizabeth Brink, 82, and Knud Fosteen, 82. The Odd Fellows Home will house them until new Danish Home is built. The old structure was condemned as a fire hazard." 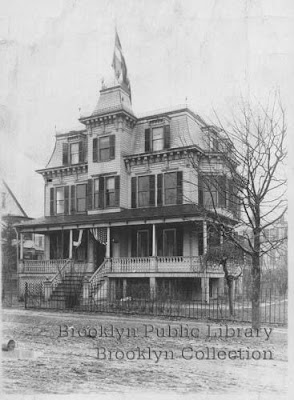 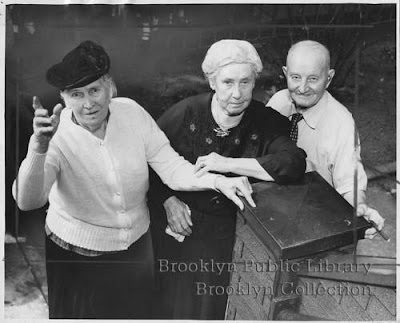 Posted by onemorefoldedsunset at Monday, December 24, 2012