A couple of weeks ago I noticed that the S&P newstand was getting a facelift.  I may be said to have an obsession with the Fifth & 9th intersection & I may dwell on matters that others consider trifling.  I liked the old look of the S&P though, with the magazine & paper racks outside, and sometimes a fat cat sitting of a stack of Posts.  It was more of a place for lingerers, both inside and out.  I liked its grubby charms.  On outer walls layers of Spanish music posters, stickers & signs in various stages of disintegration.  Always small details to catch the eye.  The new look is a blank box of glass, with phones replaced by outside ATM. It invites no interaction as you pass: no petting of said cat, or greeting to the guy behind the counter, through the open window on the Fifth side.  And nothing to catch the eye. No small dance that makes the passage through the streets a give and take of words & fleeting images.  You're either in or you're out.

Maybe the box will open up when the warm weather comes? 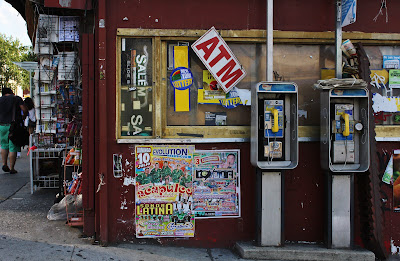 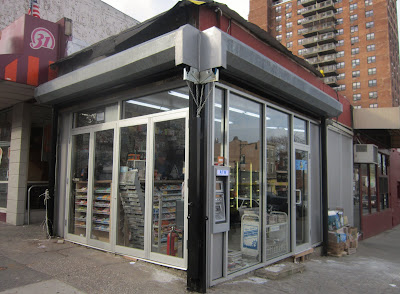 Looking into the store again this evening, it looks like even the inside magazines section has vanished, & with it, the lurking male customers.   There's not much printed matter of any kind.  You couldn't even call it a newstand anymore  It looks to be snacks, lotto & a paltry selection of mags & dailies.

And just for a little historical perspective, here's the block in an 80s tax photo (Municipal Archives). Unfortunately the lot ID pretty much blocks out the newstand: 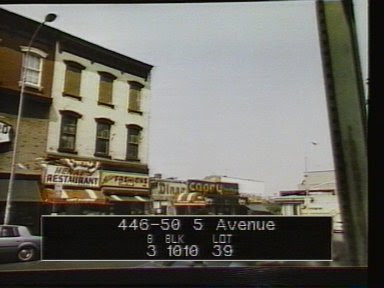 And eighty-one years ago, a newstand that looks exactly the same size, albeit with a pitched roof, 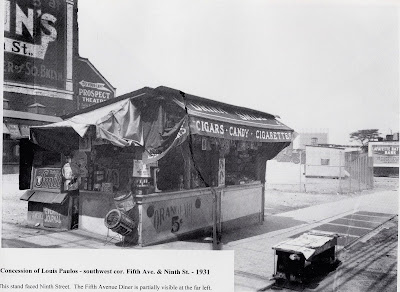 and its rather fine neighbor. 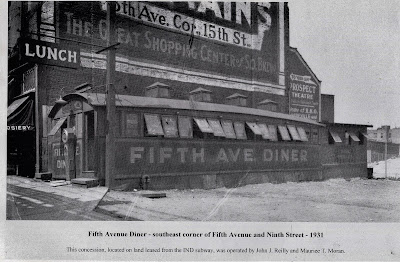 S & P's address is listed as 302 9th Street, but its lot includes Dunkin Donuts, a falafel cafe, and a sliver of a pizzeria where the diner once stood.  Dunkin wraps around S & P, and drove out the old Dee Dee Donuts on 9th a few years back.  The lot was sold a year ago.  I wondered if today's newstand was a glassified update of the same structure, but the ACRIS records were not helpful.  The certificate of occupancy for 302 was for a building built in 1931, but it was described on the cerificate as being on Prospect Park West.  So much for online research.  Somewhere in my disorganized photograph collection I'm sure I have a better shot of the corner to match with the 1931 picture, and maybe that will give a better comparison. 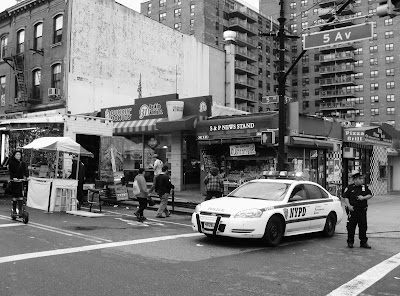 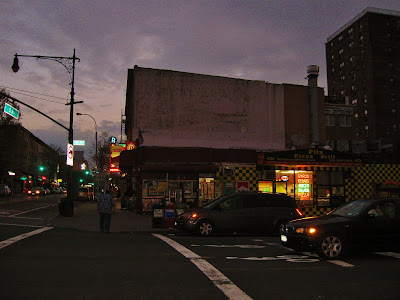 Posted by onemorefoldedsunset at Thursday, December 27, 2012

I hate the new box, but thanks for the photos from the past!

Just a little bit of weathered old crookedness, pleasing to the eye and somehow reassuring every time I saw it. That little shack looked like part of a long history, but the new glass version is utterly bland and unmemorable. It matches the Chase across the street now.

For the moment, there's still the hole-in-the-wall "records and tapes" store at the opposite corner.

Yes it was reassuring! The new structure is awful. The records & tapes place has a lease for several more years, so will be around a bit longer. And Tip Top Gifts seems to be hanging in there, along with Smith's. It's a shame though, when the avenue gets blander & blander looking.

You cannot seriously be lamenting the passing of that decrepit eyesore, can you. If so, consider a move to Detroit, and be happier.

What a lovely name, Mildred! I really did like the newsstand - it certainly looked much better then than it does now.