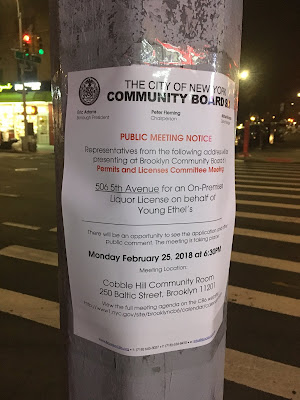 Coming.  A boxing club and a bar called Young Ethel's.

Going.  Far, far away, in the Center Slope on Seventh, the Clay Pot is closing. Founded in Park Slope's hippier, brownstone 'pioneering' years, the store originally sold the owners' hand-crafted pottery and later offered a broader range of high-end jewelry and gifts.  It had a loyal customer base over the decades. The Times ran an Amy Sohn take on the closure, inevitably designed to ruffle local feathers & generate comments.  I wasn't a Clay Pot shopper myself - I barely ever go up Seventh that far & it's not the kind of place for me anyway - but I read the comments with a certain interest.  They were a mixed bag: many expressing sadness and fond memories, a few more negative, and others weighing in on the neighborhood's history, its boundaries & the changing retail scene on Seventh.  One made me laugh a little:

"First Smith St, then 5th Ave, then Vanderbilt and Washington Aves and now Flatbush Ave have all changed dramatically - for the better - in that time. There is a edge, bustle and vibrancy on these streets that has driven out the grungy, rundown and scary feel they had in the past. The only part left like that now is 5th Ave below 9th St."

I'm not sure when this Times reader last ventured out on Fifth below 9th, but it's rather a drastic vision.  Bypassing the grungy & the rundown (I don't have the energy) to the scary: really? In 2019? I've lived around here over thirty years.  And as soon as I cross Fifth & 9th street heading south, I know I'm home.
Posted by onemorefoldedsunset at Wednesday, March 06, 2019