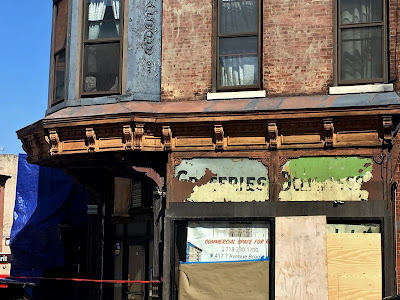 A corner grocery at Fourth & 11th closed a while back, and now the space is getting a makeover.  With the vinyl awning of the last business gone, older grocery/delicatessen signs have emerged in the panels above the store's windows. 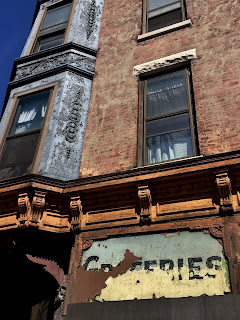 The building itself - a mixed-use apartment building with a corner store - was constructed at the end of the nineteenth-century, between 1888 and 1898, and is of conventional design for the period.  Buildings like these are solid, handsome staples of the city's streets, but we usually take them for granted.  They're functional.  We have priorities.  We're unlikely to glance at their exteriors as we hurry in for milk or beer or cigarettes.  And besides, many of their original features have long gone into hiding.  I'd passed this building many times before today, and admired the delicate decorations around the upper floor corner windows but I don't think I'd ever really looked at the outside of the store before today. The disappearance of the awning seemed to reveal not just the older window signs but also details of the entryway.  Or maybe the details were always there and I'd never noticed. 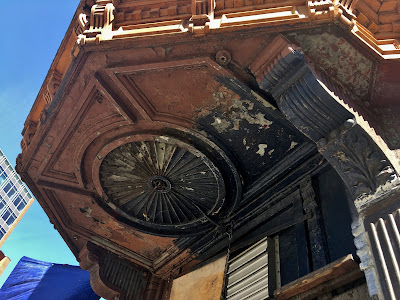 It's a funny business, the timing involved in catching a landscape's minor shifts & turns. They're there, they're gone again, in a week, a day, an hour.  We're onto them. We're looking the other way, or lost in thought, or staring at a stupid screen.  I like to think I'm observant - I'm greedy as a magpie for shiny details - but mostly it's luck.  I like it that way.

Posted by onemorefoldedsunset at Tuesday, March 12, 2019

Gorgeous. I Live for this kind of structural detail. What camera was used for these shots?

Where is this? Park Slope?

Thanks Ken - it's always nice to find something recently uncovered. Sadly I just used my phone. I've been tied up with lots of other things recently & am dying to get out for some long walks w. more time for photographs. I'm pretty amateurish; I do OK with a Canon Rebel, but it's not very portable. Next on my list: a smaller decent camera that I'll carry regularly & really learn with. This is right on the Park Slope/Gowanus border, a block from the Fourth Avenue Station.