I spent the day at the shore.  I went to a Russian supermarket and bought candy & disturbing mini sausages called TV Sticks.  On the avenue sidewalk, right in front of Starbucks, a man was passed out. Someone called an ambulance & a woman knelt to comfort him.  A crowd gathered. The EMS guys knew him as a regular.  Their faces were weary but they weren't unkind.  As they led him to the ambulance, someone shouted, "His hat! his hat!" & they picked it from the ground, dusted it off a bit, & jammed it on his head.  It was drink, the crowd nodded, looking important.  A man who couldn't speak tried to explain more about the situation.  His gestures were grand, and very exciting, but almost impossible to understand.  The sidewalk outside Starbucks stank, the crowd observed, & several of us wrinkled our noses. The drama over & the stench unbearable, the crowd dispersed. How stupidly we gather sometimes. Just down the street a couple were sitting at the curb between two parked cars.  The woman got up, unsteadily, and crouching over in the street, tried to get her partner's boots back onto his sockless feet. He was laughing and this wasn't helping much. The woman was pissed. There were panhandlers on the sidewalk all the way along Brighton Beach Avenue.  Some of them looked in desperate shape. 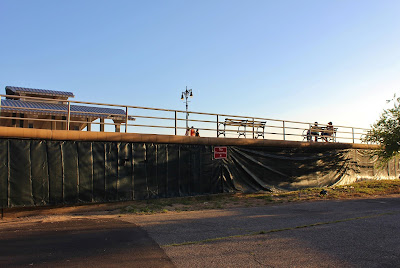 Up on the boardwalk the sun was dipping & everything was sentimental.  It got you too easily, you knew, it suckered you in, but who could resist it?  At least the boardwalk didn't deal in age discrimination.  It gilded us all.  An elderly woman in a dripping swimsuit was toweling herself; her dimpled thighs pink with cold.  There were ocean gazers and boardwalk shufflers and a cute little kid in a plastic pushcar holding an ice cream, just starting out.  A couple selling Christian books and frilly dolls and flip flops were dancing together in front of their stand. Middle-aged teenagers. They made me think of the Leonard Cohen song, & of Miss Coney Island, dancing on demand & always reminding us. Don't Postpone Joy. 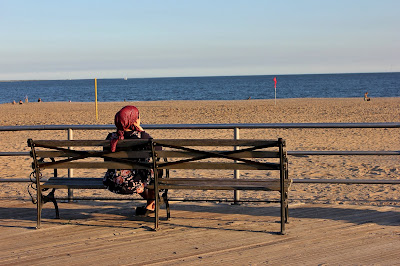 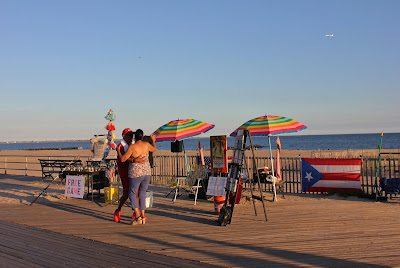 Posted by onemorefoldedsunset at Sunday, September 16, 2018