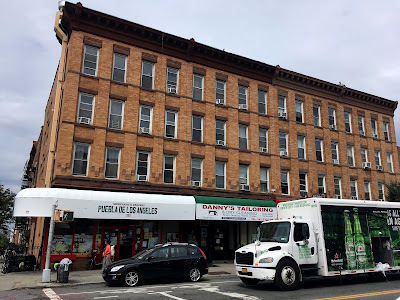 It's a bitter night, with snow on the way.  It's quiet in the grocery store, just one customer at a table. Up front, two little girls are standing at a shelf, facing a candle wrapped in cellophane. They're playing birthdays.  It's a sweet little game, and they sing so softly, then all of a sudden their interest vanishes. The game is a dull old thing.  It's time to run, & they hit the aisles, screaming with pleasure.  It's fun to watch them letting off steam, but oh, now they've gone too far.  It's time to leave, and they're sent to the back, each with a concha and a cup of milky coffee in hand. 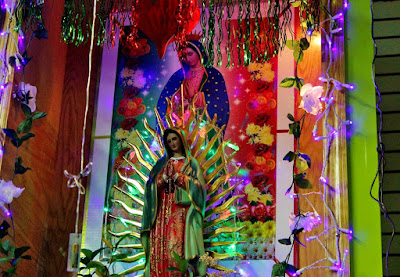 719 & 720-722 Fifth are currently listed for sale for $10.95M. 720-722 were previously occupied by the Guerrero Food Center. The space was divided into two in 2013, and since then it's been occupied by Danny's Tailoring (which moved from 681, two blocks north)) and the Puebla de Los Angeles grocery store.  I've had countless clothes altered or repaired at Danny's, and often stop by to place an order at the grocery store. The food's good. These two define the essence of a family business.  I always like seeing the kids around the place, and have sometimes lingered there, drawing pictures with a restless store-bound toddler, or, (on request & with permission), taken pictures of the schoolgirls playing outside.  This part of Fifth is still peaceful, hospitable to children chalking on the sidewalk, or lost in a game with a doll or a superhero.  Jane Jacobs would recognize it with a smile. It's quiet enough for little kids to play out front alone, with a store door open & someone nearby keeping a watchful eye.  The sidewalk isn't a means of getting from A to B; the sidewalk's home.

This is the city we love.
Posted by onemorefoldedsunset at Monday, September 10, 2018

Puebla de Los Angeles is the only place in the city I've seen tacos arabes. I hope they're able to stick around for awhile.

Yes, me too. You can definitely get tacos arabes in several Sunset Park locations (Ricos comes to mind) & I'm pretty sure there are other places in the city that serve them.

What a gorgeous window display.