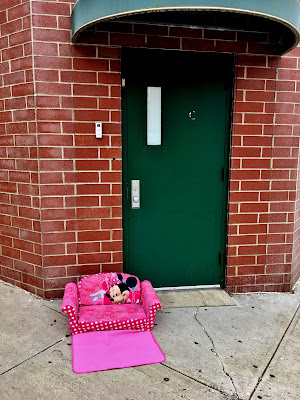 Prospect Expressway Study Envisions New Redevelopment Possibilities (Bklyner)
And here's one of them ...
The Prospect Expressway was constructed according to best practices in the mid-20th century, which included wide shoulders on either side of the roadway that slope upwards towards street level. These areas, although owned and maintained by NYSDOT, are not landscaped and provide limited utility to the community today. A feasibility study would need to be completed in conjunction with NYSDOT to determine if these underutilized spaces could be leveraged for real estate development whereby buildings are constructed on a pedestal or other elevated structure to be level with the street. New buildings constructed in this manner, particularly along 18th and 19th Streets, could provide community amenities, commercial development opportunities, or even new housing units.

Sunset Park Nixed From de Blasio’s Brooklyn-Queens Streetcar Fantasy (StreetsBlog)
The streetcar that nobody asked for is the brainchild of real estate developer Jed Walentas of Two Trees Management, whose real estate investments along the route would benefit from its construction.
The route would serve fewer than 40,000 people — in line with the city’s busiest bus routes, many of which are begging for upgrades that would cost far less money than the BQX.
It is unclear why Sunset Park was dropped from the route. Neighborhood group UPROSE strongly opposed the project, and Council Member Carlos Menchaca had wavered in his support. Then again, Michelle de la Uz of the Fifth Avenue Committee is a supporter.
The city plans to reveal the proposed route tomorrow, the source said. The mayor has changed the path significantly from previous renderings — but then again he has also abandoned the promise that the bus-on-rails would pay for itself through rising property values along the route.

Brooklyn-Queens streetcar changes course, will cost more (Curbed)
The cost of the project has now gone up from $2.5 billion to $2.73 billion, and the construction timeline has also been pushed back to start in 2024 and end sometime in 2029, long after Mayor de Blasio has left office. The city will also need about $1 billion in federal funds to ensure that the project moves forward.

Developers seek greater density along Gowanus Canal (Crain's)
The preliminary plan reserved the greatest density for Fourth Avenue, a wide thoroughfare that has already seen a boom of apartment construction in recent years, allowing buildings 12 to 17 stories in height and stating that the city would support buildings of 22 or more stories "where appropriate."
... Some planning experts ... believe the city is aiming to allow developers to build four times a site's floor area on the western side of the canal and five times on sites along the east side. The group of developers is hoping to persuade the city to raise that to six times a site's floor area.
Another complicating factor is a likely requirement for some new developments to include light manufacturing space for artists, artisans and makers ...That space is considered less lucrative than residential use and a further burden on developers' bottom lines.

Embattled Garbage Hauler Co-Owns Dump With Person Expelled From Trash Industry, Records Show (ProPublica)
Bronx politicians Jeff Klein, Mark Gjonaj, Nathalia Fernandez and Michael Benedetto submitted a letter of support for the temporary restraining order and a reinstatement of Sanitation Salvage’s license.
“Sanitation Salvage has been an exemplary example of a good corporate citizen,” they wrote.
According to a ProPublica review of state campaign finance records, since 2007, the Squitieri family, along with their companies and a web of realty corporations and LLCs, has given over $120,000 to Klein. Gjonaj has received more than $40,000 from the Squitieris as well.

Here’s how much NY AG candidates are hauling in from real estate donors - Sean Patrick Maloney has raised the most; Tish James’ contributors include broker for “Worst Landlord” Ved Parkash (The Real Deal)
Public Advocate Letitia James and Democratic Congressman Sean Patrick Maloney have combined raised more than $700,000 from New York City real estate interests in their bids to become the next AG.

The Village Voice, a New York Icon, Closes (NY Times)
Tom Robbins, a former longtime investigative journalist at The Voice, said, “It’s astonishing that this is happening in New York, the biggest media town in America.”
Now on the faculty at the Craig Newmark Graduate School of Journalism at the City University of New York, Mr. Robbins added, “I think it really helped so many people sort of figure out everything they wanted to know, from where to find an apartment to what show to see to what scandal they wanted to dig into.”

The Most Famous Lesbian Photographer You’ve Never Heard of — Until Now (NY Times)
“Brave, Beautiful Outlaws” focuses on her early work, during the time of her most intense political activism. Ms. Bright identifies Ms. Gottschalk as a “talented and sensitive visual storyteller,” whose work comprises a “vital contribution to the historical record.” Part autobiography, part ethnography, Ms. Gottschalk’s work counters the gross elision of the lesbian in the annals of queer history. Hers is a community of the socially and politically marginalized, fellow “freaks” and “outcasts” — many of whom were first cast out of their families of origin — those invisible to or rejected by the mainstream.

A story from the NY Post on a local figure in the neighborhood.
This NYC panhandler only accepts high-quality food (Post)
Ronald, who seemed confused about the nature of the attention he'd originally received from the reporter, and was subsequently anxious about the prospect of appearing in a newspaper, was terribly upset when I spoke to him today. He feels he's been ridiculed. Park Slope, and the exorbitantly priced Union Market are fair game in the press, but making fun of a panhandler is not.  Ronald is a well-liked figure, and puts no pressure on passers-by to buy him food or give him money. Maybe he has quite particular tastes, but don't we all?  And why not choose an opportune spot to look for a donation?
Ronald is something of a character, but he harms no-one.  And isn't character something to relish?  At Christmas Ronald likes to buy small presents for those who've helped him. We're all in this together - kindness is always the best response.

Earlier this year I posted Helena Appio's film, A Portrait of Mr. Pink, a lovely tribute to a Windrush-generation Lewisham resident and his extraordinary home.

Now you can read more about the making of the film, and the amazing response it received.

Mr Pink bought the house on Loampit Hill in 1967 and lived there until he died last year. He seems to have shared it with his wife and eight children, most of whom had left by the time the film was made.
He devoted much of his time to putting his stamp on the place. “I like beauty and I like prettiness,” he says in the film. “When I just bought it, well, it was not beautiful. But since I take it over and added myself towards it, I developed it to have a lightness. My additions make a difference, brighten it up."
“I’ve created a part of Jamaica here. Some like this house and some may not like it, I don’t know. But I know a lot of people like it and I like it myself.”


Posted by onemorefoldedsunset at Tuesday, September 04, 2018