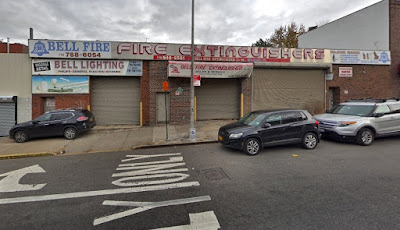 "No man is an island,  entire of itself; every man is a piece of the continent, a part of the main; if a clod be washed away by the sea, Europe is the less, as well as if a promontory were, as well as if a manor of thy friend's or of thine own were;  any man's death diminishes me, because I am involved in mankind, and therefore never send to know for whom the bell tolls; it tolls for thee."
from  Devotions Upon Emergent Occasions - John Donne

Sometimes you have to get Donne & a TV sit-com together.

A demolition permit is in place for the one-story building at 135 Prospect Avenue, just up from Third & facing the expressway.  The zoning for the lot is R6B - General Residence - with a C2-4 commercial overlay, meaning that any new construction on the site could be residential, commercial or mixed-use.  You could hardly find a less-auspicious spot for a residential building, but hey, this is Gowanus.  The owner on file for 135 Prospect is Yechil M. Landau, of Brooklyn Plaza 1 LLC, a company with a Brooklyn address. Is Yechil a variant of Yechiel? We can't say, though name variations are common in business transactions. Brooklyn real estate developer Yechiel Landau's projects have included affordable housing construction in the South Bronx, but in other business areas Landau has come under some scrutiny. Take his work as one of Assemblyman Dov Hikind's "community liaison" employees.

Landau also maintains a job as a $9,500-a-year, part-time "community liaison" in the office of veteran Brooklyn Assemblyman Dov Hikind. The lawmaker is a longtime close friend of Landau who has received $9,000 in campaign contributions from the developer.
While the pay is a drop in the bucket for Landau, such part-time gigs in the Legislature can come with a major perk: access for the employee and their family to New York government's generous, subsidized health benefit packages, which are collectively worth vastly more than a $9,500 salary.  (Times Union)

In addition to his other business activities, Landau is involved in home care and nursing home investments.  In 2010 State Senator John Sampson was alleged to have suppressed negative testimony in regard to the granting of a license for a home care agency. The agency, Shining Star, was co-owned by his sister and Landau.

Henriquez’s relationship with Sampson was not disclosed on the state application or at public hearings. Some members of committees that have voted on Shining Star’s application were unaware that she is his sister. Sampson did not comment by press time.
Shining Star’s majority owner, Yechiel Landau, a Brooklyn real estate executive and owner of YTM Development and Construction, has contributed about $20,000 to city and state political campaigns. He has a net worth of $8.4 million, according to the application.
If approved, Shining Star would get much of its funding from the state through Medicaid. (Crain's)

In 2015, Sampson was convicted of obstruction and lying to federal agents and was sentenced to five years in prison.

Landau was also named as one of the out-of-state co-investors in a Vermont nursing home that closed late last year.

The White River Junction nursing home’s out-of-state owners decided to close the facility after the Centers for Medicare and Medicaid Services announced plans to stop making payments to Brookside as a result of Brookside’s failure to adequately address a series of health and safety violations.
... When the Green Mountain Care Board, or GMCB, approved the (2015) sale of  Brookside and the 73-bed Green Mountain Nursing and Rehabilitation in Colchester, Vt., from the Rice family to the New York investors, board members expressed concerns that the quality of care provided could decline under the new owners’ management.
“Notwithstanding the applicants’ stated intention to maintain or improve the quality of care at the Vermont facilities, we express our concern, in light of low CMS quality ratings at Mosholu and Silverbrook — facilities with which one or more of the applicants have been affiliated — that quality ratings for patient care at Brookside and Green Mountain will also decline,” the board wrote in its Aug. 27, 2015, decision.  (Valley News)

We'll update when we find out what's being planned for 135. 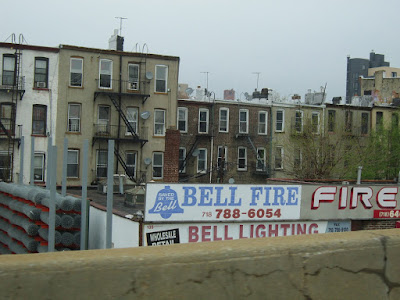 Update: 9/26
Yes, at this gorgeous location, the junction of the Prospect & Gowanus Expressways, there are plans afoot for a four-story plus penthouse/cellar residential building.  The air & the steady grind of vehicular traffic jams should be divine!

Posted by onemorefoldedsunset at Tuesday, August 21, 2018