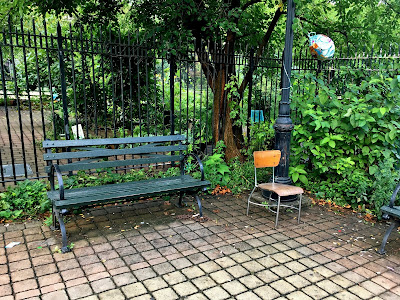 John Akomfrah at the New Museum (NY Times)
What’s most notable about this show — beyond the weight of history and the creation of new cultural vocabularies, or the identifying of overlooked ones — is Mr. Akomfrah’s facility in working with moving images on multiple screens. This method of presentation allows him to create works whose nonlinear development echoes newly evolving ideas about history and culture in philosophy and postmodern and postcolonial theory. “The Unfinished Conversation” (2012) is a brilliant example of this, a three-channel work that takes as its subject the Jamaican-born intellectual Stuart Hall, who says in the film that “identities are formed at the unstable point where personal lives meet the narrative of history,” adding, “Identity is an ever-unfinished conversation.”

A late-in-the-game Times review.  The exhibition is only around for one more week.  It's a must.

Nine years of wonderful Spitalfields Life - the annual review (Spitalfields Life)
When I began nine years ago, my ambition was to write celebrating the people of the East End. More than three thousand stories later, this undertaking has proven an education. In learning of the extraordinary resilience of East Enders, equally I have become aware of their struggles.

New home for Hanks!  We'll miss the Third/Atlantic corner, with its Mohawk ironworker/Doray Tavern history, but just as was the case for the Subway Inn, the chance of a second life is a fine thing.  I believe Hank's is open at its current spot through the end of the year, but be on the safe side. Go raise a glass to the old place while the door's still open.

A Real-Time Map Tracks the Building Frenzy That’s Transforming New York
(NY Times)
The new map gives an overview of the frenzy of construction that has transformed blocks and entire neighborhoods. The buildings department issued 168,233 construction permits in 2017, its most ever — up from 125,579 construction permits in 2007. The largest chunk of those permits, 73,489, was, not surprisingly, for buildings in Manhattan, followed by Brooklyn (42,830) and Queens (32,401). The permits cover both new projects and multiyear projects that require annual permit renewals.
The map pinpoints the largest construction projects — typically new buildings and conversions — with blue dots that can be clicked for detailed information about each project, including its contractor, property history and any violations.

Gowanus ‘Mudbreaking’ Held For Ennis Playground Renovation (Bklyner)
The future of the Gowanus neighborhood is getting increased attention lately with the recent announcement of a neighborhood rezoning framework and the EPA’s dredging of the infamous Superfund site. Ennis Playground sits at the edge of the bleak** Southwest Brooklyn Industrial Business Zone (IBZ), where warehouses and manufacturers hug the polluted canal—away from residential Gowanus, which may be why the no-frills park was considered so quiet**.

*Not bleak, just industrial.  ** It certainly needs resurfacing & some freshening up, but its location, next to the busy Sanitation Garage and other industrial warehouses, has never been a great one for a playground. As a playground it might be better suited for teens or adults (fitness/ball courts/skateboards) than for little kids.

Ken Russell Photographs Teddy Girls (Flashbak)
Ken Russell came and asked if there were any Teddy girls there to photograph. There weren’t many Teds in my area, just a few of us so we turned heads. You would walk past people on the street and hear them saying ‘Oh god, look at what they are wearing!’ Which made me chuckle. The photos were taken where I lived in Canning Town, this area was called the Docklands Settlement. I lived at home with my parents and older sister and brother, it was a prosperous working class area because of the docks on the River Thames. In 1955 I left school and went to work with my sister in a factory. At the time I was happy to leave, thought it was marvellous. But then after a little while I wished I has still been in school, work was so boring.”
Posted by onemorefoldedsunset at Saturday, August 25, 2018