There's an extensive menu at Puebla de Los Angeles, the grocery store that replaced the Guerrero Food Center (5th & 23rd) last fall.  The layout of Puebla de Los Angeles has stayed pretty much the same as Guerrero's, with food prepared on one side of the shop and cashier opposite, though the place shrank in size.  There are still a couple of tables at the back of the store for eating in house.  The religious shrine at the back of the store has a quite different set of figures & is beautiful to look up to.  This picture does not do it justice. 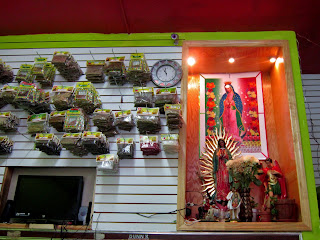 There are other, smaller menu signs , but here are the main dishes: 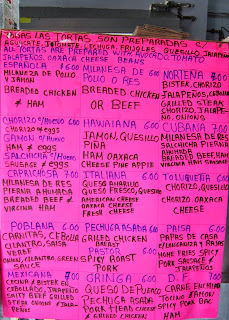 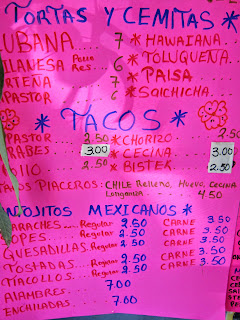 I can't emphasize enough how much I still love this part of Fifth, with businesses like this one, and Luigi's, Girasol, El Continental, Jubilat. Even with an explosion of property values and an ugly rash of development scarring the avenue and the blocks around it, even with empty stores waiting for upscale tenants, it's a world away from the Fifth farther north. A slow summer walk up and down these streets, up the hill, or down towards the water, stopping for pupusas or a Grandma slice, or maybe with a cherry ice stickily in hand to beat the heat, is better by far than cutting through the crowds above 9th,  fighting your way through stroller lots to claim a brunch seat or eating some overpriced cutely named ice cream inspired by the nearby canal. That world creeps ever southward, past the expressway, past the cemetery, on, relentless, into Sunset Park, whitening and rarefying neighborhoods as it goes.  It's a done deal.

Enjoy the beauty of the here and now.


Posted by onemorefoldedsunset at Thursday, July 31, 2014