540 Fifth: The Complaints Keep Rolling In

Back in early June, I took a look at the construction site at 540 Fifth Avenue.  Rather than adding to an existing one storey building, as per approved plans, workers had demolished the existing structure.  At that point in time, there were two complaints about this illegal work up on the DOB site.  The first (Class B) complaint, made on May 20th, was active, but the second, similar complaint (June 2nd) was "resolved" as being a "duplicate" of the first.  An odd conclusion, I thought.  Since then, the first complaint has remained active, but there have been four more complaints:

June 30th: 3484185 = RESOLVED
CONSTRUCTION DOES NOT HAVE A PERMIT TO BUILD WHAT WAS INTENDED TO BE BUILT.
SITE SHOWS SIGNS OF IT BEING UNSAFE. KEROSINE WAS SPILLED ALL OVER THE SITE AND THE
FUMES CAME UP TO OUR BUILDING.  (PRIORITY B)


July 22nd: 3486826 = RESOLVED
THEY ARE CONSTRUCTING A BUILDING WITHOUT A PERMIT.  THERE HAS BEEN SEVERAL COMPLAINTS
FILED ABOUT THIS MATTER.  THEY ARE STILL DOING CONSTRUCTION ON THE PREMISES.  (PRIORITY  B)

July 22nd: 3486863 = RESOLVED
CONSTRUCTION BEING DONE WITHOUT HAVING A PERMIT  (PRIORITY B)

Maybe yesterday's complaint will stir the DOB to action.  A little careful reading of the permits in place
might have speeded up inspection of this shoddy mess.  If that's what's caused the lack of attention from inspectors. A poor job all round. 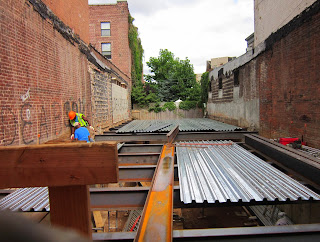 The most recent - Priority A complaint - has been resolved:

With no work at the time of the visit, one wonders if the inspection was nothing more involved than the squinting through the fence that produced the photograph above, ha, ha.  And of course, the work completed thus far is without permit.  This one seems destined to slide quietly along.

Posted by onemorefoldedsunset at Thursday, July 24, 2014