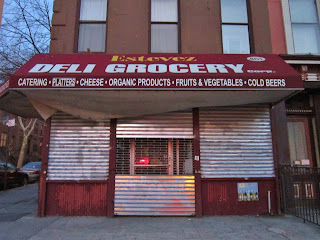 I walked by the Estevez grocery store (Sixth & 10th) recently, and saw that it had closed down. I don't know the cause of the closure, but I do know the place was loved by its regulars, even in quiet times. There used to be plenty of grocery stores along Sixth, but now there are none in a twenty three block stretch between Sterling & 16th.  The blocks between 9th and 11th, for example, had a regular shopping strip once, and my old neighbor Sal told me you could get all the basics there.  When I arrived in the 80s, the only functioning food shops on these two blocks were Estevez's & another, a corner south, where I bought the daily paper and various supplies from the gloomiest of shopkeepers. The latter is now a favorite local eating spot of our current mayor.  Across the avenue, there was still a leftover painted sign above one store window, for "fancy sandwiches" and I was sorry I never got to try one.  As the neighborhood around Sixth changed (the avenue no longer a real estate boundary dividing the eastern Slope from a geographic "no go" west), with a younger and more affluent population predominant, the right-round-the-corner grocery store fell into decline.   People walked up or down to Seventh or Fifth, or bought their groceries weekly in one fell swoop, and there were less people around in the day for small, regular shopping errands.  And grocery needs became more upscale - more along Union Market lines.  Stores became corner bistros, or nursery schools, or converted to residential use.
461 Sixth is up for rent at $4,100 per month.  Will it stay a grocery store, or will it assume a new identity?  I guess we'll find out soon.
Posted by onemorefoldedsunset at Sunday, March 23, 2014