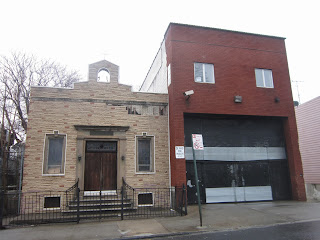 Cast out from Central Europe, back I must go to the borders of Greenwood/South Slope/Sunset Park.  I've skipped a couple of blocks in the long trek south, but will return to them shortly.  I wanted to head over to 34th Street (Fourth/Fifth), and the little church building facing the cemetery.  I'd say this really is Sunset Park by now. St. Mary's Chapel closed in 2000, though I don't know if it's been used for other purposes subsequently.  It's a wooden structure covered in brick veneer, with simple decoration (at least by now): some modest stained glass, and a couple of startled looking faces above the windows.  Right next to the church is a sign for the neighboring warehouse: De An's Pork Products. 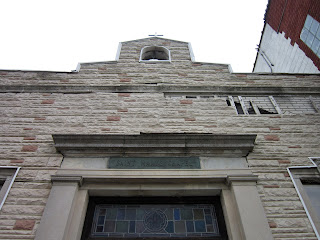 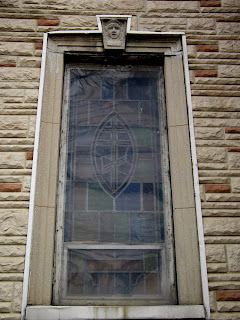 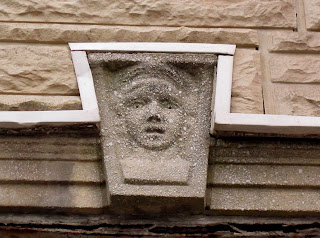 When I first saw it, I thought maybe it was another Scandinavian church, but actually St. Mary's (in recent years at least) served a Rusyn/Slovak congregation.  I had a hard time finding much about it.  The only real source online was The Byzantine Forum - "For we can not but speak of what we have seen and heard" - & this proved to be extremely helpful .  A lively conversation on the number of Ruthenian parishes left in the city apparently strayed from forum guidelines & proved, to the outsider at least, somewhat arcane & waspish at times.  Enjoyably so. It made me think of Barbara Pym.

I thought St. Elias was Ruthenian. Wasn't St. Elias and St. Mary's Chapel closed by Bishop Andrew, and Frs. Hospodar and Malitz prior to Fr. Malitz (or should I say Fr. Terminator) being sent to Holy Trinity in Bridgport?

In the course of all that compulsive speaking (hurrah for its scriptural inspiration) reference was made to a story in the New Rusyn Times (Pittsburgh, 2004):

Brooklyn has long been a focal point of Rusyn immigrant settlement... The latest wave began around 1989 and has continued to the present. Unlike previous waves, the latest wave describes itself as Slovak, but for the most part they continue to associate with the Rusyns from their villages who preceded them.
Of this newest wave, the churchgoers among them primarily became members of one of two parish communities in the city: St. Nicholas Carpatho-Russian Orthodox Church on East 10th Street in Manhattan (especially those from Orjabyna), and St. Mary's Byzantine Catholic Chapel on 34th Street in Brooklyn (especially those from Litmanova and Kamjunka). Gradually these communities are changing due to the migration of some of the immigrants to New Jersey (especially around Manville, Whitehouse Station, and Flemington) with more recent immigrants taking their place, with many families in each parish having seen several generations baptized, married, and buried in the same parish.St. Mary's Chapel was a beacon to the immigrant Rusyns: under the care of its longtime pastor, the Liturgy was served regularly in Church Slavonic, the homily was given in Rusyn, and in the late 1980s and early 1990s the Epistle and Gospel readings were actually in Rusyn vernacular, using the translations published in Slovakia by the well-known Rusyn spiritual leader, Father Frantiek Krajnjak of Medilabirci.

According to the article, when St Mary's closed in 2000, most of the congregation transferred to the St. Nicholas Ukrainian Catholic Church on 19th Street, where they found a warm reception.  A service at the church is described in detail:

The first half of the Liturgy was sung entirely in Church Slavonic, and the Subcarpathian Rusyn chant (prostopinije) was sung just as I remembered from St. Mary's Chapel years before, in the distinctive melodies of northern Spi. The Ukrainian parishioners sang along, but the voices of the Rusyns (who were perhaps 75% or more of those in church) were unmistakably those of Litmanova and Kamjunka. I wondered how they might handle the Epistle and Gospel readings (which I expected would be in Ukrainian). Incredibly, a woman who appeared to be the cantor from the Slovak group opened the very Rusyn-language Epistles & Gospels book published by Father Krajnjak in Slovakia, and chanted the Epistle in Rusyn! For whatever Slovak identity they have assumed, their Rusyn spirit lives on-and thrives! in this otherwise Ukrainian environment.

I was quite surprised to learn of the 80s/90s recent wave of Rusyns in this part of Brooklyn, and happy to learn of the parish integration at St. Nick's.  While the fading markers of once strong Polish & Ukrainian communities are still evident around here, there's little to indicate Rusyn or Slovak strongholds, except perhaps, for Milan restaurant over on 5th & 22nd.  I hope that ten years on St. Nicholas is thriving, & I wonder what the future has in store for the Chapel.  I'd love to take a look inside.

Note:  I do have pictures of St. Nicholas, & will add them here. 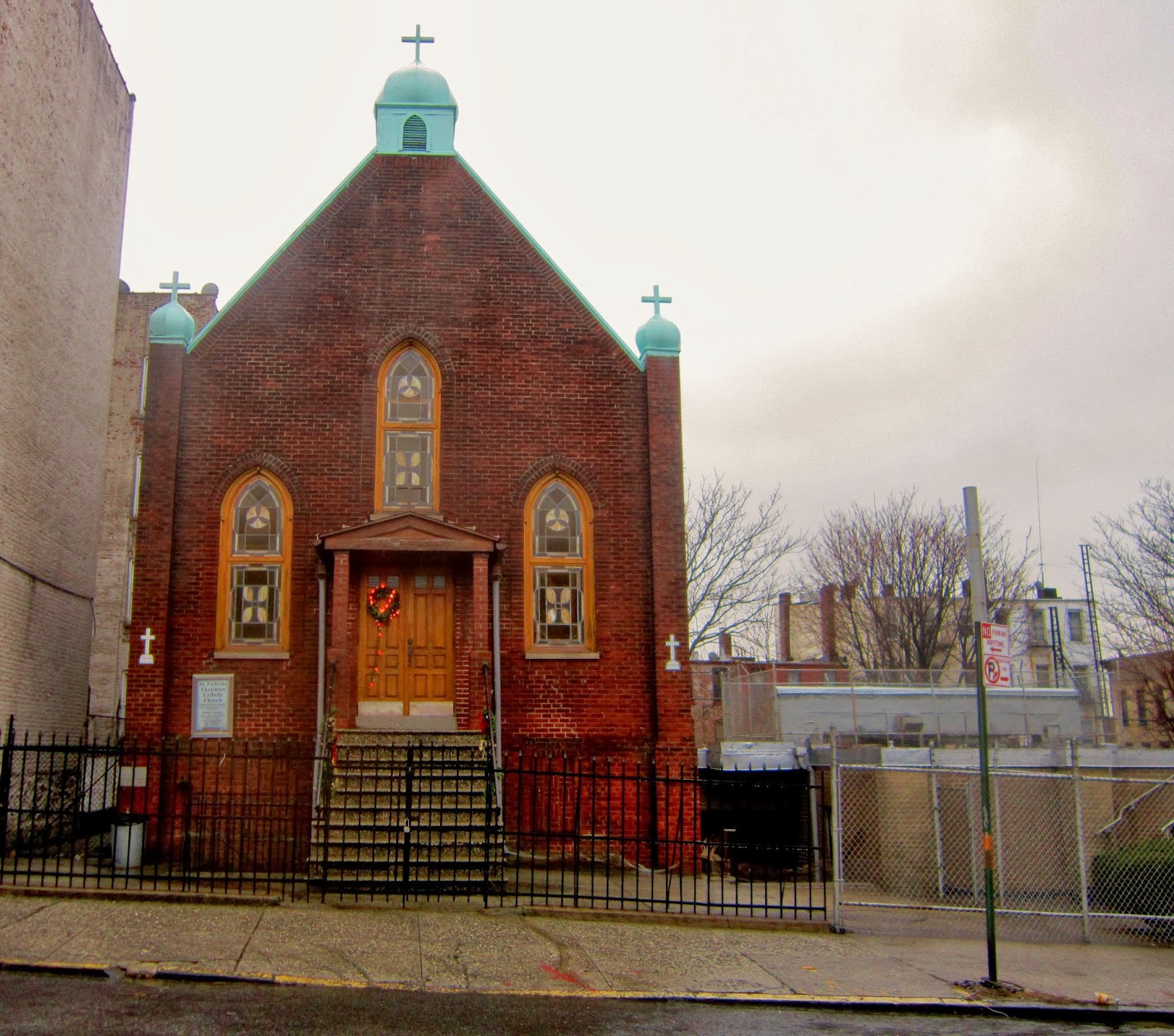 Posted by onemorefoldedsunset at Tuesday, March 11, 2014

I used to attend St. Marys as a child. The church closed when I was 14. I have very fond memories of our parish.

Thank you! Do have have any photographs of the church before it closed?