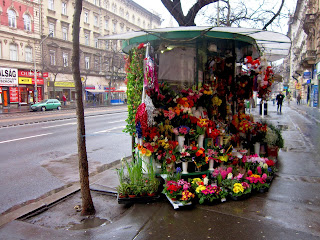 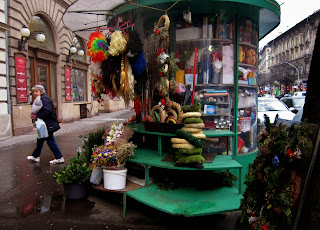 but for me that clown mop only echoes the clown in the ads I saw plastered all over the city when I was there. The ads, put up by backers of the ruling right-wing Fidesz party, brand the left-wing opposition running in next month's elections as a party of crooks & buffoons: 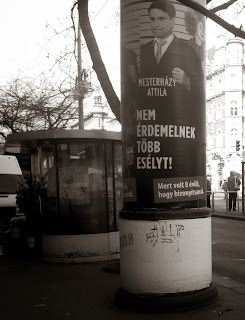 (a poster that) shows three or four guys wearing neckties standing in a police lineup, alongside a clown. In one of the more ubiquitous versions of the poster, two of the men are former left-wing prime ministers of Hungary. A third is Attila Mesterhazy, president of the country’s Socialist Party and a current candidate for prime minister in the coming election in April. The fourth is Miklos Hagyo, the former left-wing deputy mayor of Budapest, who is currently the subject of a corruption trial (and not running for re-election). The men, and the clown, appear above the slogan “They Don’t Deserve Another Chance.” Given that political advertising has been sharply and abruptly curtailed by Prime Minister Viktor Orban and his ruling Fidesz Party, the pre-eminence of a political ad — on billboards, lampposts and the sides of buses — might seem surprising. But Fidesz ... has become adept at controlling the message. It has rewritten the state’s Constitution, come to dominate all branches of government and held increasing sway over the news media.
(Danny Hakim, NY Times, March 1)

Parties are allowed by the campaign law to advertise without limit on billboards. But, as it turns out, most of the display advertising space in the country is owned by companies in the possession of the circle of oligarchs close to Fidesz ... If the opposition parties buy billboard space, the proceeds go straight into the pocket of the Fidesz family of companies. As it turns out, however, having the opposition enrich the governing party through the purchase of billboard space was the least of the problems with the monopoly on billboards. One of the leaders of the Unity Alliance told me on a recent trip to Budapest that all of the billboards in the country are sold out for the duration of the campaign and not available for purchase. But one can see already that Fidesz-friendly billboards are everywhere. As I write, Budapest streets, streetcars, metro stations and other public spaces are flooded with Fidesz-friendly ads, using the spaces owned by the Fidesz-friendly companies.
(Kim Lane Scheppele, in Paul Krugman's The Conscience of a Liberal blog, NY Times, Feb. 28)
Posted by onemorefoldedsunset at Friday, March 07, 2014

These kiosks would look great in Astor Place.