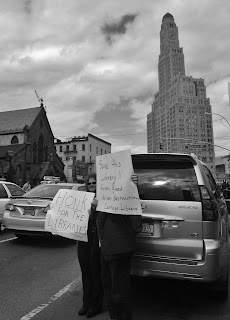 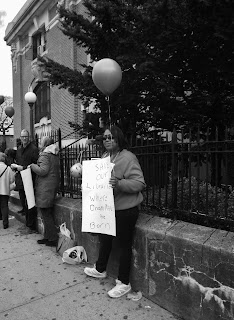 At the Citizens Defending Libraries rally outside the Pacific Branch on Saturday afternoon. A great turnout, with many local residents, passing along Fourth, horrified to hear of plans to sell the library, & keen to sign the petition to save it.  A young teen, thirteen or fourteen, listened to some of the public speakers, horrified.  "I can't believe it.  I've been coming here since I was a little kid."

Over in England, libraries are also under siege, perhaps nowhere more so than in Newcastle-on-Tyne (my home for a few years), where an incredible 10 out of 18 city libraries are set for closure.  You can read about the campaign against the Newcastle library closures here, and here's an extract from writer Lee Hall's open letter to the city council.  Closures.  Sale of premises.  Relocation with reduced services.  All these things, whether in New York City or the north-east of England, hurt the poorest citizens hardest of all:

This notion that the library was central to our lives survived two World Wars, the Great Depression, Thatcher and any number of philistine administrations. If these closures go through on your watch I believe it will be a scar on your legacy you will regret for the rest of your political life. These are difficult times but they require much more canny solutions. Although removing the libraries will take away vital support for the poor and the elderly who use them as a daily resource (inevitably putting the strain on many of the council's other budgets) few people will actually die. But you will kill generation after generation of kids who, denied access to culture, science, business, technology or art, will not become the scientists, doctors, lawyers, politicians, writers or psychiatrists who will sustain the region, protect the vulnerable, kickstart the economy and provide a civilised environment for us all regardless of how economically underprivileged we are. You consign these individuals to a life of underachievement but you condemn the people of the City to decades of economic and cultural sclerosis which will be just as real and devastating.
Posted by onemorefoldedsunset at Monday, April 15, 2013