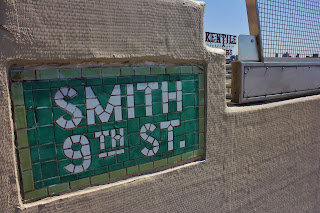 Back on the platform after almost two years. Work on the station is ongoing, but it opened to the public today. While the bigwigs were making speeches inside, a small group of riders stood outside behind yellow tape. Excitement was mixed with exasperation. The entrance - with a curving metal deco look - pleased many, and one man said it used to be like an alleyway there before.  I thought privately that the new façade looked way too shiny, and on the flimsy side.  Not, perhaps, designed to last. 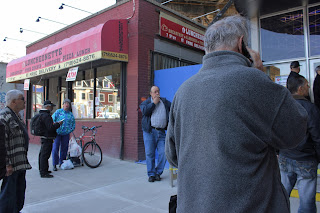 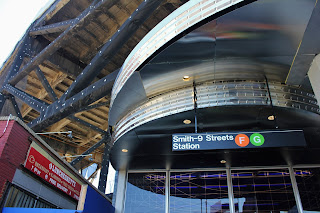 There's no handicapped access to the station, as many had hoped. and several older onlookers grumbled about this. In fact, with new steps at the entrance (an anti-flooding measure?) it's actually harder for the disabled or elderly to navigate. Some had hoped for an elevator, others for a bathroom.  In general, there was a good deal of anti-Bloomberg sentiment.  An older woman, close by, said "Some people do nothing but complain," which made me wonder if I was one of those people.

After a while, Marty Markowitz emerged from within.  PR moment over, he had no Brooklyn-themed bons mots for the people, and strode quickly away with a sour expression.. When Joan Millman came out, a middle aged guy asked why the regular people were being kept waiting.  It was past opening time. He was not polite, and things were only running a few minutes behind schedule, and Millman got snappy.  The local pols. did not seem to be having a good day. Finally, the tape was removed, & despite our grievances, a thrill of excitement caught all of us.  We scurried in. 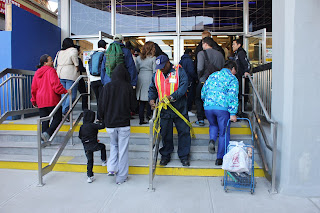 It's certainly a less desolate looking space inside.  This was a long-neglected subway stop, serving a largely lower-income rider demographic, but times have changed.  These days, the median household census income at this stop is just under $100,000, third highest of the Brooklyn F stations, after Seventh Avenue ($104,000) and York Street (a hefty $167,000, highest on the entire F line).   This part of Carroll & Gowanus has become decidedly more upscale.  Still, this station also serves a Red Hook Houses group of riders whose income has barely shifted, and these riders are the poorest served for public transportation in the borough.  After two years, the trek to a subway stop was shorter, and the place looked bright, and clean inside.  Up the first escalators, long-boarded windows showed new views, just a hint of the glories at the top. 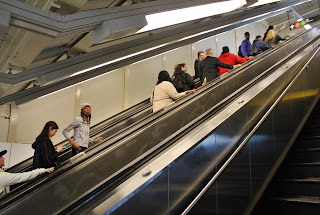 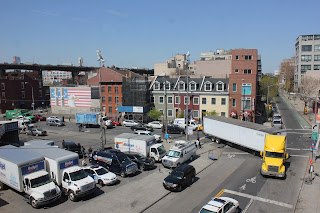 And the views are stunning. There was always the platform wonder, but now, at every level, you can look out at the landscape, at the multi-tiered array of house, canal, scrapyard, warehouse, highway, grain-terminal, bank building, postcard Manhattan in the distance.  It's such a hyper-detailed set of views there's too much to take in at once, and you want to see it again and again and again.  If ever I leave Brooklyn, this landscape, that I ride through almost every day, will be one of the things I miss the most.  Sometimes, though, it makes me wistful: industries faded or defunct,  once blue-collar districts ripe for those who can slap down all-cash multi-million payments on the table.  Gorgeous views of the unaffordable.  The new-look station gives us more views than ever, including more glimpses of the actual viaduct structure. While I was looking out, a man next to me said, "This'll bring in the tourists.  This place will be a destination."  The thought of a subway station as tourist mecca, (a mini High Line?) was a depressing one.  My spirits were dampened.

But I wasn't going to keep that thought in my mind today.  It was up to the top (still no escalator for the final leg, riders noted, with cynical chuckles).  I knew the platform views would be the same, but for two years, I'd been wondering if the boarded-up platform windows (seen gaping open when one bypassed through) would be opened up again for good.  They were, with just a grille for safety, and no glass to get in the way.  I got a little over-enthusiastic about those windows, and took too many pictures, and then I discovered that you can get in really close with a camera and bypass the barriers.  Both ways are good. 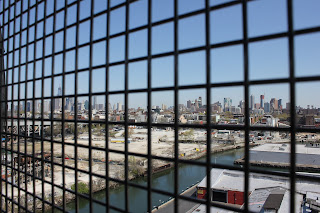 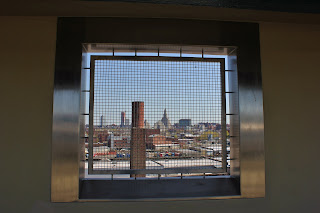 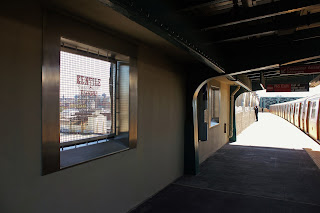 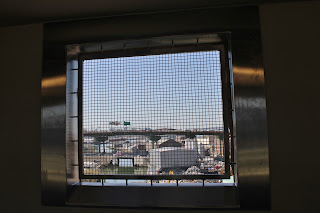 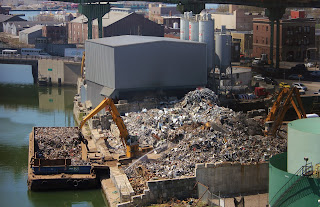 Then I had enough of windows. On the Coney Island bound side, where it was quiet as it always is in the middle of the day, I had the front end of the platform to myself. I was the luckiest person in the city.  However New York might change, however the station might become a double-decker tour bus hotspot (absurd thought that it was), this patch of platform was all mine. It was a perfect spring day, no-one was in sight: nothing but sky, and landscape and tracks, with the F or the G train chugging through every few minutes. I was drunk on beauty. 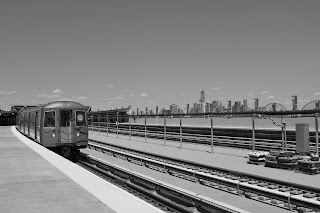 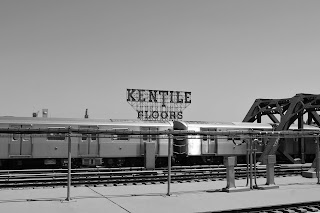 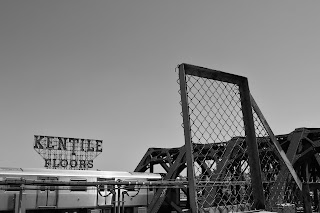 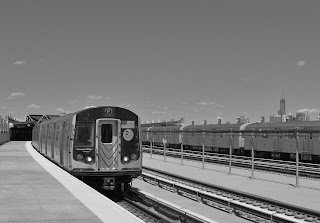 Then I jumped on this F train, and took it one stop home.
Posted by onemorefoldedsunset at Friday, April 26, 2013