I recently discovered the 1938 HOLC (Housing Ownership Loan Corporation) map of Brooklyn, available in digitalized form at Urban Oasis . This is one of the infamous security maps, demarcating the state-sponsored financially & racially segregated areas of the city. Redlining. You can find similar maps for Queens, Manhattan & the Bronx, along with those of other urban centers, at the same website.

I'm the sort of person who can spend hours poring over maps, and it's interesting looking at this one, to see how the economic status of some neighborhoods is radically different today (those red, fourth- grade swaths of Carroll Gardens, Boerum & Cobble Hill now some of the priciest in the city) & other, blue (second grade) areas like the choicest strips of Brooklyn Heights & park block prime Slope, essentially unchanged. There's only one small green (first grade) patch on the map, and that's a sliver of Bay Ridge, hugging the shoreline from 99th to Bay Ridge Avenue. Our house falls within a large stretch of red (well, I guess it's pink, really), connecting the afore-mentioned Carroll/Cobble/Boerum area, along with Red Hook (undivided from Carroll Gardens), with Gowanus and the westerly part of Park Slope (mostly beyond Fourth or Fifth Avenues, but in its southern stretch west of Seventh Avenue), with the part of Windsor Terrace nearer to the cemetery, & with South Park Slope/Green-Wood down to 36th Street. Sunset Park is a solid yellow (third-grade), except for a block-wide strip between Third & Second Avenues extending all the way down to Bay Ridge.

If you look at the pieces of the Slope west of Fifth Avenue, and below 10th Street, (where the red area is wider & extends east to Seventh Avenue), and walk that neighborhood today, you can see how the red separates brownstone & brick from streets that are more typically a mix of smaller brick and frame buildings, and the architecture of that economic divide is still apparent.  It was apparent in demographics too, not so very long ago, but these days even a (fancily renovated) wooden house can sell for more two million dollars or more.  These streets of older, more modest houses, many freestanding, don't have the have the handsome, comfortable sturdiness of brick & brownstone blocks, but I like their lack of stodgy conformity.  They present an anarchic array of style, age, and materials, with surprises tucked away on every street.  And they hearken back to a much earlier borough.

Today the red line around here also more or less divides the streets ravaged by construction frenzy from those that, even if not land-marked, contain valuable enough housing stock to remain largely intact. 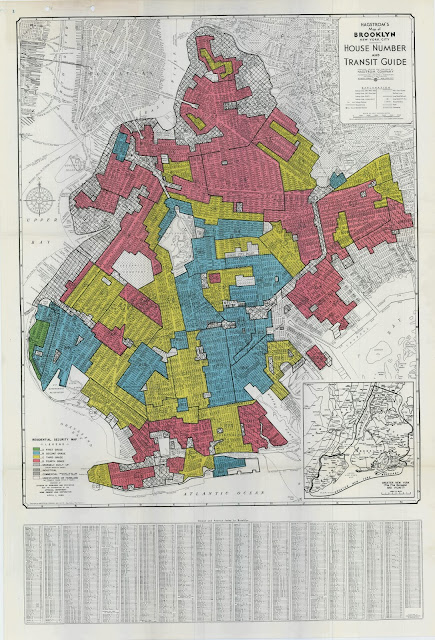 Posted by onemorefoldedsunset at Monday, February 18, 2013

" Awesome Blog Thanks For sharing"