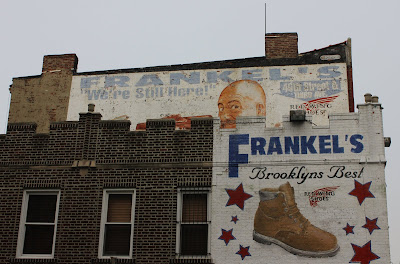 Florin had met Marty when he bought his very first pair of boots in 1989, shortly after moving to New York City, and he had been going to his store ever since. He liked Marty, and he liked the eclectic collection of goods he stocked. In addition to surplus military clothing and hunting equipment, Marty had numerous boxes of vintage Adidas that he was selling over the web to teenagers in Japan, and a pair of size 40 Timberland lace-ups that were said to have been specially made for Shaquille O'Neal ... As Florin browsed through the collection of surplus military supplies, it occured to him: in this country he now called home, he could probably buy everything a guerilla army needed."

from Be Not Afraid: for You Have Sons in America - How a Brooklyn Roofer Helped Lure the US into the Kosovo War, by Stacy Sullivan (Macmillan, 2004)


It's not surprising to find Marty in a book about intrigue & insurgency. I've never been in a store staffed by such a crew of raconteurs.  On a Saturday afternoon a steady stream of customers came into the store, and everyone took their time. You'll hear every accent in here, and returning customers are welcomed back like family.  The store caters mostly to blue-collar trade (construction & other outdoor occupations) but there are plenty of others in the know. There's no hurrying when you shop in Frankel's; they have four generations of retail experience and it shows: here the art of the deal and the art of storytelling are as one. The guys here are schmoozers. I only bought a pair of socks & I ended up in the store for almost an hour.  I spoke to Marty, to his son, and to salesman Juan. I saw photographs of Marty's mom (over a hundred), heard of family-owned jewelry factories in Vietnam & of time in the forces in England.  Of missing living in Brooklyn, & wanting to come home from Jersey.  How many languages do the guys here claim to speak?  It seemed incredulously impressive.  The stories jokey, burnished, slightly manic at times.  Retail performance art.  And what's with that tiny toy dog tied up by the entrance?  The one Juan takes to with a bat to rile the gullible passer-by?   It was all slightly unreal, in the best possible way.  Frankel's has been around since 1890, and is overlooked by the Gowanus Expressway. It 's two doors down from Golden DVD (with Preview Booths), one of the sex shops still scattered along Third. Is Frankel's the oldest business in Sunset Park? If not, it must come close.  If you need a pair of sturdy boots, and you want to be treated like a real person, if you want to escape the soulless experience of chainstore purchasing that the city offers with ever-greater frequency, this is your best option by far.  Head over. 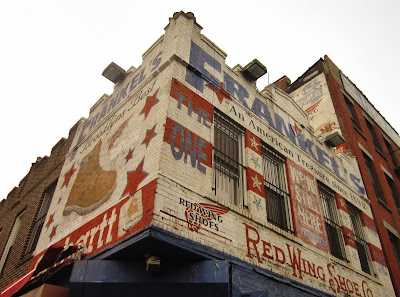 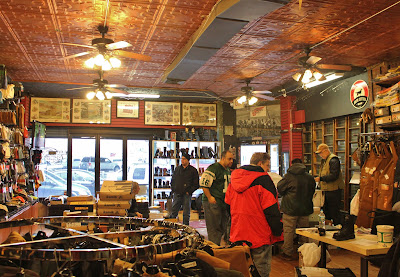 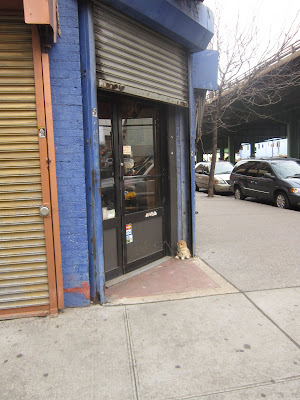 Posted by onemorefoldedsunset at Monday, February 04, 2013