There's a sign up for the upcoming Slope Cafe, which will occupy a large space at the corner of Fourth Avenue & 10th St.  The landlord for this building, Prime Properties of New York, hit the Worst Landlords Watchlist again this year, with violations at the Fourth address & around the corner at 302-304 10th, where there are currently a whopping 224 infractions & a partial vacate order. 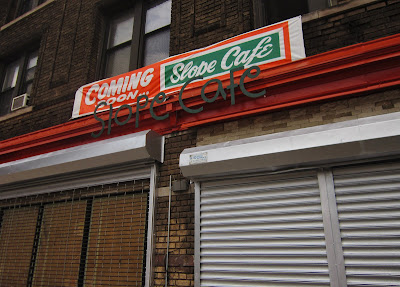 Update (8/22): After I wrote this, I felt guilty about seeming very negative about this new business. Really I meant to suggest that having to deal with such a notoriously bad landlord would be troublesome, to say the least.   Anyway, the cafe is slated to open in early September, and I wish the owners lots of luck.   And yes, there's still going to be West Indian food on the menu, which will be great! Since the Brawta offshoot closed years ago, there's been no Caribbean food around the South Slope. I can't wait to try this place.
Posted by onemorefoldedsunset at Monday, August 06, 2012