A stroll down Fifth, from the south side of 9th to 24th Street.  There are fifteen bars along the strip (if you count the metal joint Lucky 13, just off the avenue), and ten of them have appeared over the last three years. The oldest of these bars appeared in 2004/2005 (Lucky 13, Commonwealth, Royale (now Fifth Estate) and Buttermilk).  There are also a number of restaurant/bars, and most of these have opened over the same period of time.  At 17th St., you can still see the sign for the boarded-up Mambo Lounge (formerly Lola's), a Latin jazz & salsa bar which closed in 2010 after a supermarket fire.  At 24th, the long-closed White Eagle Tavern is still boarded up, awaiting its transformation. There are no long-standing bars left. You'd have to hop over 9th St. to Smith's Tavern for that, or a couple of blocks farther north to Jackie's Fifth Amendment. With O'Connors currently closed up, those would be the last old bars you'd find on Fifth all the way to Flatbush. Friggin Happy Friggin Hour at the former Smolen Bar & Grill, which opened as Mary's in 2011 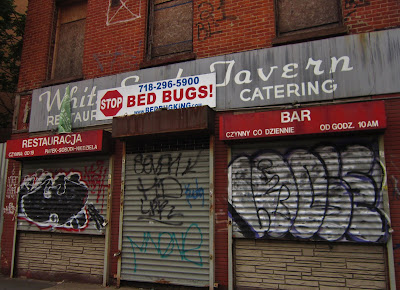 Posted by onemorefoldedsunset at Thursday, August 09, 2012