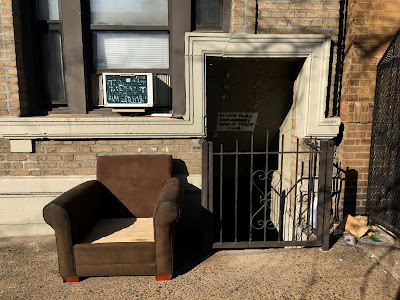 There isn't an abandoned couch or worn-down armchair that doesn't make me think of the discarded beauties on author Robert Guskind's Gowanus Lounge blog.  It's a reflex action. Just over ten years after his death (the Brooklyn memorial was on April 4th, 2009) his influence lingers.  Reading his obituary on the Gowanus Lounge website, I'm still touched and impressed by the tributes of local bloggers, journalists, photographers, artists and activists - of all varieties and combinations - that were influenced by his writing and encouraged in their own work through his generosity of spirit.  Do take the time to read it, and while you're there, dip into the three years-worth of entries preserved on the site.

Posted by onemorefoldedsunset at Thursday, April 04, 2019