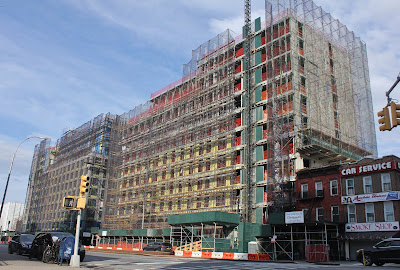 Last week Bklyner reported that two homeless shelters would be opening this fall at 535 and 555 Fourth Avenue, between 14th and 16th Streets. The shelters will be operated by WIN (Women in Need) which is run by former Council Speaker and mayoral candidate Christine Quinn.  Current plans are for 148 units to house homeless families at 535, and 105, along with 29 permanent housing units, at 555.

535 and 555 are familiar to the blog.  Both belong to Adam America/Slate, who have been active developers in the neighborhood. Last year they sold a nearby rental building, at 237 11th Street, for $81M.  Farther afield, they earned notoriety for their involvement in the controversial Rivington House sale, having bought the property from the Allure Group, who allegedly defied a deed restriction on the sale of the nursing home.

Adam America/Slate  bought 535, formerly the premises of Strauss auto repair, for $22M in 2014, and acquired 541 - 555, a parcel of eight three-family rowhouses from Anshel Friedman and Ariel Karpan in 2016 for $25M.  The two new buildings remain unfinished, and have been mired in construction woes. In 2016 an SWO was issued at 535, when structural forms at the top of the building were damaged by wind and partially collapsed.  Two floors of the building were  subsequently removed, along with partial slab work on lower floors.  535 has been issued a long list of serious construction violations; eight of them, dating between 2016 and 2019 are still open. 555 was recently issued a partial SWO (still in effect) and a number of other violations remain open.

Given that the boom of higher-end construction on Fourth has yielded next to no affordable housing thus far, and given the need for a more equitable distribution of homeless shelters throughout the city, it seems reasonable enough to put additional homeless shelters in affluent, liberal Park Slope, even if the shelters proposed (just like the higher rise condos and rentals on Fourth) are conveniently distanced from its brownstone heartland.  WIN appears to have a decent record of services and management. The CAMBA family shelter that opened in Kensington in 2015 has settled into the neighborhood without any serious issues and with the general support of the community.  It is, of course, considerably smaller than the buildings on Fourth Avenue.

Homeless shelters are not a solution to the city's massive homeless problem.  But they are a necessity.  And it's just not right to concentrate them in the poorest parts of the city.  Every neighborhood must play its part.  So I say, let's welcome the ones on Fourth, if the right conditions and support are met.  A few thoughts to start off:

Transparency.  What's the nature of the deal between the City and Adam America/Slate?  When did negotiations begin?  Are the buildings safely constructed?

How about increasing the number of permanent housing units? (A better option than the current plan, maybe, would be to have 535 as a WIN shelter & 555 as a mix of permanent housing for formerly homeless families & deeply affordable housing for other eligible applicants.  Doubt that will happen though, given the City's likely deal with the developers.)

Community engagement.  Let's learn more about WIN & its specific plans for the Park Slope sites.  Let's find out about the programs, and ways to develop good relationships between new & established residents.

School placement.  Is there good planning in place for placement in nearby schools?  The proposed shelters are right next door to PS124, a thriving and diverse elementary school, but it hardly seems equipped for such a potentially large influx of new kids.  Nor does it seem fair.  How will schools be selected to take in new students, bearing in mind zoning, the current numbers in schools right now, and the best learning environment for new pupils? (This might be an opportunity for some of the wealthier, whiter schools in Park Slope to help out, and open their doors to some of the kids). 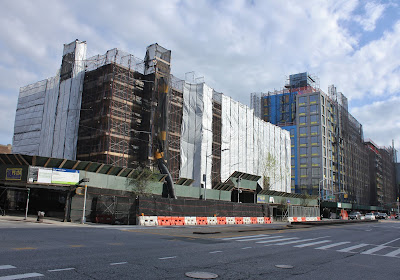 As the Bklyner article mentions, there'll be a community meeting on May 1st to discuss the new shelters.  There'll be lots to talk about, and lots to learn.

Posted by onemorefoldedsunset at Monday, April 22, 2019

new shelters? Wow, while they rze projects in Chelsea. They will need more shelters for our ever expanding homeless population.