Remember when ads like these and their audio versions were a staple on the TV and the radio?  When Dr Zizmor & his local pals were commercial kings of the subway?  Without a (subway-fold please) paper or a book to read, without the conversation of a friend or a casual exchange with a stranger, before the rider traveled lost, head down, in screen world, you were more alert to your surroundings.  Part of it was a rider's safety instinct, but mostly it was the sheer pleasure of eyeing your fellow New Yorkers, and listening to their conversations.  Inevitably though, there were lulls when all that was left was a queasy contemplation of the subway ads.  They had a kind of wan, hypnotic charm.

The locals ads don't have much of a presence on the subway any more.  It costs too much.  And out on the street it ain't so easy either. The pressures of online shopping and high rents and the presence of mega-stores affect the viability of chains both national and local, along with independent businesses.  There are plenty of vacancies.  I walked along Fifth from 9th to 23rd the other day and counted around forty stores either vacant or closing shortly.

After the recent death of its Queens-born founder, Neil Patron, Petland Discounts is closing its tri-state stores. Our local Petland, at Fifth & 13th, will be one of them. The Times ran a piece on the closures earlier this month.

Staff and customers at Petland Discounts stores in Brooklyn on Friday acted as though the closings were all but certain. The fish tanks’ bubbles were still roiling and the cockatiels kept chirping, but the people were glum.
Tatiana Vazquez, the Park Slope store’s manager, said she had known about her store’s impending closure for about a week.
She said Petland Discounts was struggling to compete with online retailers. Fish food priced $13 at her store, she said, could sell for $5 at the pet store site Chewy.com. 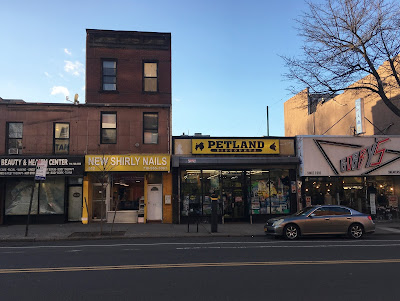 There's a closing sale at the Park Slope store, and a steady stream of shoppers coming in.  The staff are keeping a brave face, but it's a sad scene.  You can hardly blame shoppers for wanting to save money when budgets are tight, but the more we shop online the less we support the stores in our neighborhood, and the job security of our neighbors. If you order your groceries Fresh Direct, or your purchases come to you most of the time via UPS or Fed-Ex you're a big part of the problem.  And you also miss out on the small, day-to-day exchanges that make city living such a pleasure. The city's a web of connections, beaded with light, and delicately woven. Train lines, bridges, firemen, store clerks, shoppers, panhandlers, rich, poor, old, young.  Without our mutual care and support, the city's nothing at all.
Posted by onemorefoldedsunset at Monday, February 18, 2019