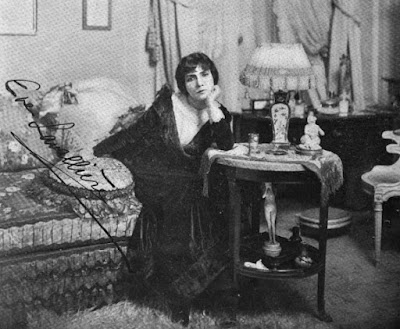 Mlle. Lavallière in her boudoir in a characteristic pose - The Theatre, Vol. XIV, 1911

Ève Lavallière (born Eugénie Fenoglio) had planned a tour of the United States but never made it. She did get into the American papers though. She had quite a life. Born into chaotic & violent family circumstances in 1866 - her father shot her mother dead & then killed himself - she rose to become a star of the French stage, with a career that spanned from the 1890s to World War I.  While she took both light and tragic roles, she was most famous for the comic ones.  Lavallière became fabulously wealthy and had a string of lovers and patrons. Towards the end of her career, when she was in her mid-forties, she had her hair cut short by society hairdresser Antoine de Paris. It's said the new style was to make her look younger for an ingénue part but whatever the reason the style caused a stir.  She was the first French actress to wear a bob. 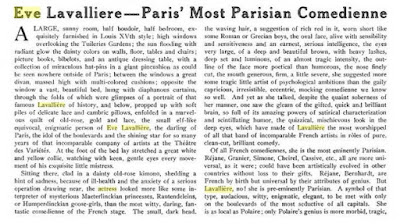 A Theater interview of 1911 suggests an off-stage sensibility more Bohemian than Belle Époque:

Sitting there, clad in a dainty old-rose kimono, shedding a hint of sadness, because of ill-health and the anxiety of a serious operation drawing near, the actress looked more some interpreter of mysterious Maeterlinckian princesses ... than the most witty, daring, fantastic comedienne of the French stage.  The small dark head, the waving hair, a suggestion of red in it, worn short like some Roman or Grecian boys, the oval face, alive with sensibility and sensitiveness, and an earnest, serious intelligence, the eyes very large, of a deep and beautiful brown, with heavy lashes, deep set and luminous, of an almost tragic intensity ...

A few years later Lavallière's stage career was over.  In 1917, exhausted & in a state of crisis, she retreated to a chateau near Tours, along with her personal companion, Leonia Delbecq.  Under the influence of a local priest, Father Chesteigner, she apparently underwent a religious conversion, and along with Leonia adopted a life of prayer, missionary work and meditation.

If you look online for Lavallière today most of the initial search results come from Catholic websites; she's still a poster child for bad girl-gone-good, an irredeemably wanton soul who even entreated Satan to restore her looks miraculously drawn to the light.  Books of period vintage offer a similar angle, and many of them draw on a particular image. 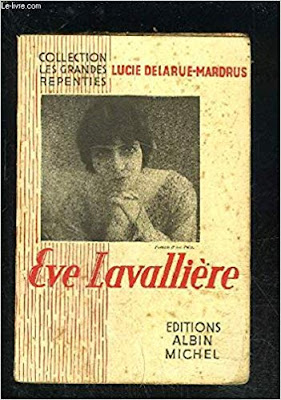 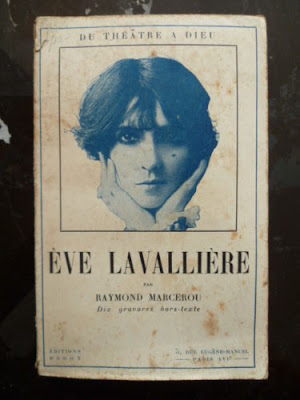 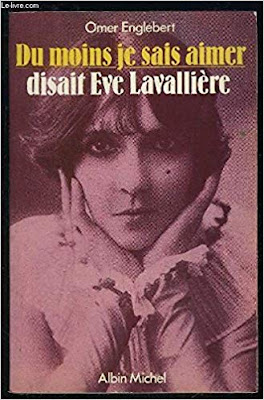 The woman remains stubbornly opaque, locked into a role that runs too perfect an arc, more stylized and sentimental than her stage performances.  And how, we wonder, was the directorial control divided between the Church & Lavallière herself?  I'd love to see a (deconstructed) film version.
Posted by onemorefoldedsunset at Wednesday, February 13, 2019