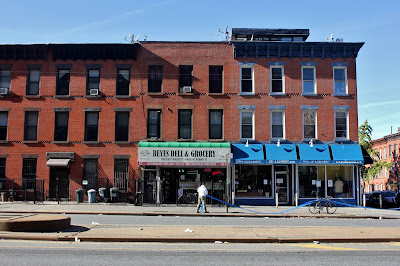 Reyes Deli & Grocery & E-Z Laundry Cleaners.  As far as I know, no-one there has "taco" or "spin cycle" tattooed on their hands.  The Reyes food is good.

Gowanus Reaches New Culinary Heights With First Michelin-Starred Restaurant
“I hope that it helps to grow the neighborhood and lets people know that they can follow their dreams out here,” said Claro’s chef, T.J. Steele, who has the word “Taco” tattooed on his hand. (WSJ)

720,000 New York City tax photos from 1940 are now digitized so you can find your building online (6sqft)
The New York City Department of Records & Information Services has released 720,000 digitized images made from the original negatives, meaning that a photograph of every building in the city that was standing at the time is now available to look up online.

The Christmas elves again!
Ex-NYPD cop on trial for bribery says he didn’t have sex with hooker on plane (Post)
Prosecutors say Reichberg and Rechnitz teamed up in 2008 to bribe public officials and several cops, including Grant, who then helped them by going easy on arrested friends, fixing traffic tickets, expediting gun permits and resolving their private disputes.

Who's not sighing with relief that they're not up for jury duty right now?  But the combo of terror & levity is riveting.
Juror sobs after being picked for El Chapo’s trial (Post)
Jury selection was lively, with one potential juror getting the ax after he’d asked for the kingpin’s autograph, saying he was a “fan.”
Another man was tossed because he was worried he could be identified by his sandwich order, the “el Chapo,” while another was dismissed for being too easily identifiable as a Michael Jackson impersonator. Another six were tossed from the pool because they feared for their safety.

An Old-School New York Art-World Rivalry Makes a Comeback with Andy Warhol and John Ashbery Exhibits (Vanity Fair)
Ashbery is best known for his poems, but he was also a revered art critic and collector, and throughout the 60s and 70s became an integral member of the bohemian, hyperintellectual set of artists and poets collectively referred to as the New York School. Ashbery was a fixture in this urbane, multi-lingual scene, whose members often congregated at the Tibor de Nagy Gallery on Manhattan’s Lower East Side and included poets Frank O’Hara and Kenneth Koch, as well as expressionists such as Jane Freilicher, Fairfield Porter, and Larry Rivers. Works by Freilicher, Porter, and Rivers—who would often gift paintings to Ashbery to thank him for positive reviews—have made their way into Kasmin’s show. Helen Frankenthaler gifted him a painting as well, and it now hangs in the show, though at one point she had awkwardly tried to buy it back.

Last screening of Ruth Kaaserer's documentary Gwendolyn tonight, at Anthology Film Archives
“Ruth Kaaserer enters an athletic environment that has little to do with the familiar images of muscle building, grinding workouts, and sweat. More restrained and graceful scenes were rarely seen at a gym. GWENDOLYN pays the same direct attention to the everyday life of this unusual woman: visits to the doctor, life with her much younger husband Charlie, conversations with her son about what writing and sewing have in common. Sometimes there’s no choice – the seams must be unstitched.”
Gwendolyn Trailer from Taskovski Films on Vimeo.


So Long, Max Levitas (Spitalfields Life)
Max Levitas spoke of being at the centre of a definitive moment in the history of the East End in 1936 when three hundred thousand people came together to form a human chain – in the face of three thousand fascists with an escort of ten thousand police –  to assert the nature of the territory as a place where Fascism and racism are unacceptable. It was a watershed in resistance to Fascism in Europe and the slogan that echoed around Stepney and Whitechapel that day was “No paseran” – from the Spanish Civil War – “They shall not pass.”
Posted by onemorefoldedsunset at Thursday, November 08, 2018