"First girl admitted--The Polar Bear Club at Manhattan Beach, admission to which was closed to members of the female sex since its inception 25 years ago, recently opened its lists to women. The first fair one to join was Miss Dale Roberts of 1608 Shore Boulevard, who is shown as she was properly initiated with a face wash of snow. She seems to be unaware of the menace of the club's standard-bearer [person wearing polar bear costume] at the right." 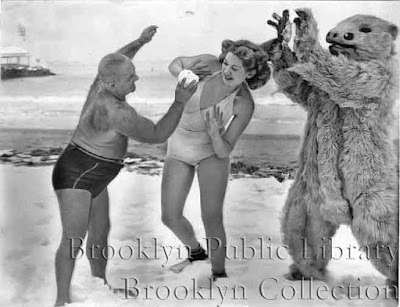 Posted by onemorefoldedsunset at Saturday, December 30, 2017