At the Demo Site 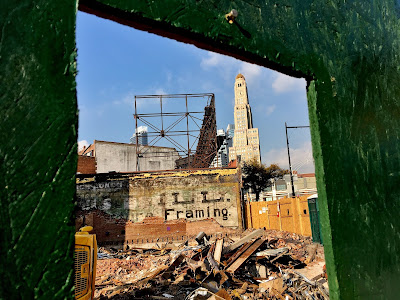 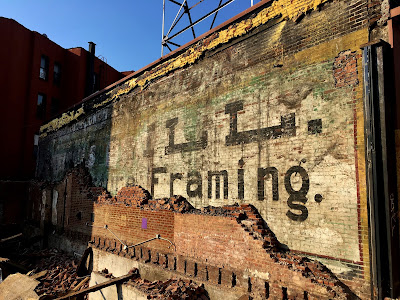 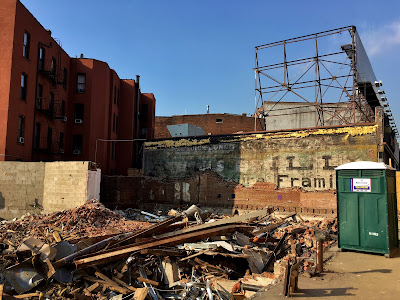 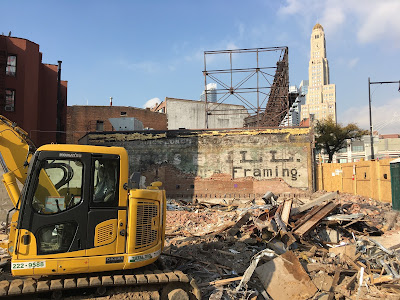 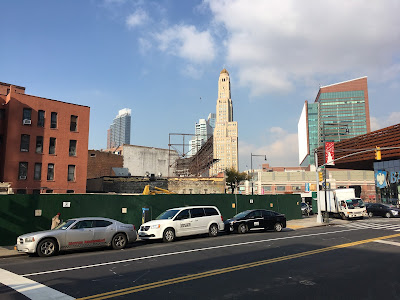 Update - 12/5 : I have revised my wobbly research findings.  I could still do w. technical backup!


I spend a lot of time looking through viewing panels. Last time I walked along here the vacant property at Fifth/Flatbush/Dean was still standing, but now the parcel is a demolition site. When did this happen?

As I peered at the demolition, the ghost signs on the side wall of Shake Shack (170 Flatbush Avenue) caught my attention.  I really need someone with a sharper eye and a keener sense of history to figure these ones out. There are at least two business signs on the wall here - one a picture framing shop, and one a "quick lunch" restaurant. Today's 170, a warehouse building, seems to be the same building indicated on a 1916 E.B.Hyde map. This replaced narrower brick buildings shown on the 1903 Hyde map. In 1898/9 the whole block was vacant, and by 1903 the lots north of 170 Flatbush Avenue and over to Dean St. were still empty, except for a couple of small wooden buildings at the corner of Flatbush & Fifth Avenues. In 1905 an ad in the Brooklyn Eagle lists a wooden house at 172 Flatbush Avenue for sale; the house is at the back of the lot, and presumably freestanding. All this would seem to suggest that the signs on the side of 170 date to somewhere between around 1900 and 1915.  I'm wondering if a wall of the older, narrower 170 (the one with the signs on it) was retained when the building was expanded/altered/rebuilt.

The construction history of the buildings adjacent to 170 is hazy. I originally thought they were newer than 1916, but as they hew to the configuration shown on the 1916 Hyde map, I now think they must just have been modernized.  Details on the Dean Street side of the building that spans Flatbush/Fifth/Dean do seem to reveal more vintage looks.  If anyone has more info on this I'd love to know.

Though it looks impossible that the Flatbush Chop House (172-4 Flatbush) was ever advertised on the side of 170 Flatbush Avenue, it was fun to discover its existence while I was digging around. In the 1920's it offered fifty cent lunches and Shore Dinners, with lobster listed at $1.75.  It billed itself as "The Most Delightful Dining Place in Brooklyn." This Daily Eagle advertisement from 1930 boasts of its new Bar Grill, "one of the finest and most completely equipped in the city." 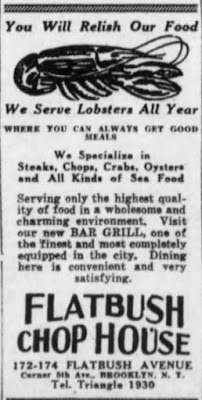 I couldn't find any picture framing businesses listed in the immediate vicinity of 170 Flatbush, though I did come across a couple of framers on nearby Fulton Street.  Of course, as I dug into all those Eagle ads I became distracted and came across an old ad for the Triangle store at 180 Flatbush.  Years after the sporting goods store closed, the building still stands empty, but here's the army store business in 1922. 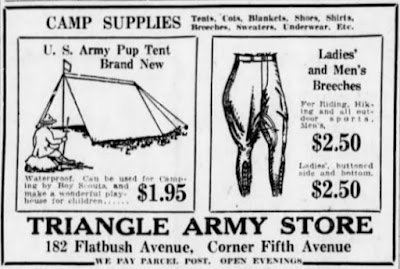 Posted by onemorefoldedsunset at Monday, December 04, 2017

Thanks so much for posting this ghost sign. I saw it while passing the other night and was planning to come back by day to photograph. Wonder what the Quick lunch place was like.

Thanks! - I'm still not happy with that sign chronology - I have to take another look at the age/development of the buildings adjacent to 170.

Thanks for the research. I found it while doing some investigating myself. Great site!

Thanks -I saw the same thing a few days ago & tried to find out more about that framing business, but no luck. If you catch any more of the signs emerging let me know!