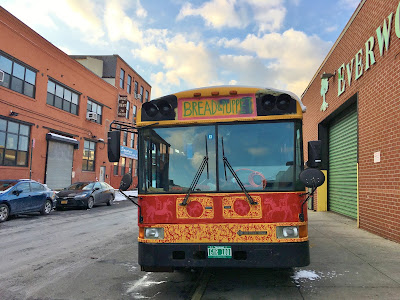 I spotted the bus parked on a Gowanus street. Of course. The Bread & Puppet theater company was back in town, performing its annual run in the East Village, where it was founded. If you're thinking seasonal means Rockettes or Wonderful Lives, think again:

"Directed by founder Peter Schumann, the shows hope to inspire the general public to create possibilitarian alternatives to our current political order. “Domestic insurrection is called for when the organs of public information are owned and manipulated by the same interests that own and manipulate the self-destructive economy”, says Schumann. “Domestic insurrection is the urgent response of citizens and residents to prevent imminent catastrophe.” The Domestic Insurrection Circus is 2017’s iteration of the large-scale political puppet circuses that Bread & Puppet has mounted each year since 1970. With brightly colored flags, twenty-foot cardboard billionaires, paper-maché animals, dada slapstick antics and a giant fantastic brass band the circus encourages audiences to take action against the intolerable political circumstances of the moment.
The Honey Let's Go Home Opera is a foray into flatness with cardboard as its muse and prime material. Cardboard is bent, stapled, and vividly painted by Schumann to create surrealist costumes and improbable puppets. “The nature of cardboard is refuse”, sings a chorus member, “meaning the discard of the economic empire´s excesses. By declaring reality to be cardboard you open the gates to unheard of growth and prosperity.” (City Guide NYC) 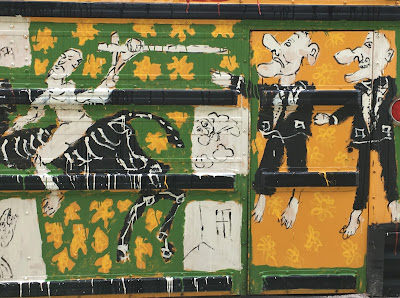 Our own family has seen several Bread & Puppet performances, both in New York & at the company's base in Glover, Vermont.  The Glover trip involved a whole bunch of kids poorly secured in a vintage, converted VW camper driven by a (vintage) family friend.  It was long on charisma & short on safety, but all survived the crazy ride. 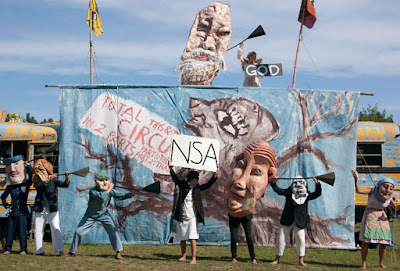 Bread & Puppet offers grand spectacle & a bracing dose of anti-establishment invective.  It's a period trip, to be sure, & its style & substance reflects the company's 60s roots, right down to the home made bread handed out to audience members after the show, but its message remains topical, and its methods influential:

"Still the circus retains Bread and Puppet’s signature brew of political satire, poetic tableaus, and vaudeville clowning ... Giants of the “99 percent” confront “corporate dwarves.” A (literal) whistle blower emerges from the intelligence community. The dead of our war in Afghanistan are remembered. Plans for an oil pipeline across Vermont are criticized. A song is sung to honor “the courageous soldier Chelsea Manning, who got 35 years in prison for telling the truth...”
...The theater’s influence is profound. One example: the giant puppets that routinely appear at public protests are descendents of Bread and Puppet—often directly because company alums have started their own theaters around the world. "(The Artery, WBUR, 2013)

At the end of this catastrophic Year of Trump (with little relief in sight), a blast of Bread & Puppet might be just what we need. 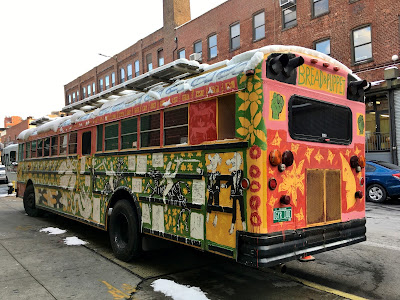 Posted by onemorefoldedsunset at Monday, December 11, 2017