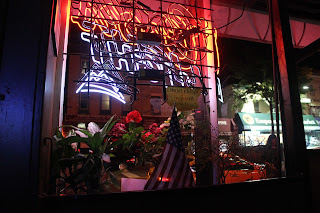 Well, as I'd hoped, the date was not precise. Jackie's didn't actually close its doors for good last night. Depending on the terms of a lease, Jackie's will be serving buckets of Buds for either a week or a month longer. So it wasn't quite an evening of final farewells. What I like about older bars like this is the age range: sure there were small knots of twenty-somethings with W.G.Grace beards & heavy-rimmed glasses, who spent much of their time either wrapt in phoneworld or running to re-charge the devices, but they were absorbed easily enough into the larger stream of older drinkers and the atmosphere was tolerant. Despite its reputation for loathing the New Brooklyn Regime (who doesn't sympathize there?), Jackie's is a friendly bar, It was not crowded last night, but busy, with no chance of sitting at the bar. A group of sturdy older women holding down the far end of the room. Sports on TVs that no-one seemed to be watching. A motley selection of mostly older songs playing - Heart of Glass, Runaway, & even a sweet & maudlin Auld Lang Syne. The young woman tending bar was kept on her toes, but it wasn't so packed that she couldn't step out for regular smoke-breaks. Still, I'm never one for even vaguely crowded Saturday night bars. I like mid-week evenings or afternoons, up at a stool & quiet enough for random conversation. There's still a little time left for that here.
Posted by onemorefoldedsunset at Sunday, September 15, 2013