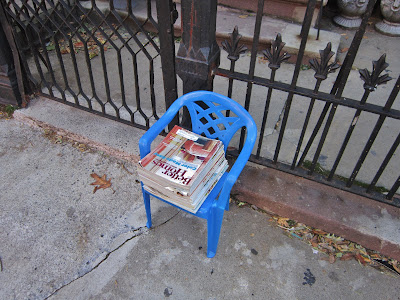 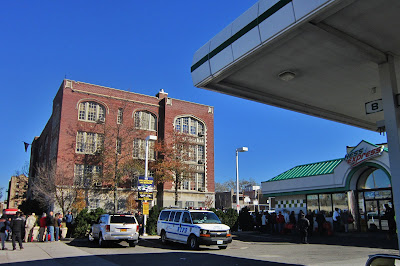 I walked from 36th to Butler on Fourth.  Most gas stations were open, but with long lines of cars & pedestrians.  Police were present, and the queues seemed quiet.  At one station, firemen were filling up gas cans.  Around the corner on Sackett, a first responder (sanitation) told me he wasn't considered a priority customer & was finding it impossible to find fuel.  According to him, a lot of retired cops were jumping the lines. Over in Red Hook, his mother's house, that had been in the family for generations, was ruined. They might as well tear it down,  he said.

On Fifth, there were the usual Sunday lines for brunch.  And the usual signs of self-absorption. Behind me as I walked, one woman complained that she hadn't had nearly enough hollandaise with her eggs.  A cafe board declared an outage of pumpkin spices (a triple exclamation hardship).  At Washington Park, a cluster of mothers was petitioning (Leave Our Zone Alone) against proposed changes to the 321 district, which would jeopardize their children's education, and, perhaps more importantly, have negative effects on property investment. 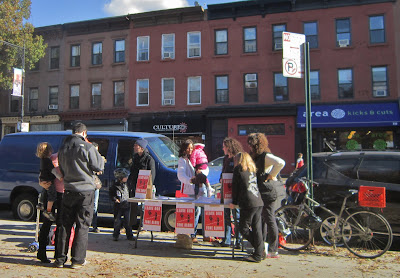 Posted by onemorefoldedsunset at Sunday, November 04, 2012

Ugh, the brunchers made me upset over the weekend. In my area, residents were still sweeping mud out of their flooded apartments while others loudly complained there were no 'everything' bagels left and what on earth to do with a 'plain' bagel. During the week, I went uptown to get phone service and it seemed everywhere I went, people were partying, completely oblivious to what what going on elsewhere.

Yes, a real disconnect. Those silly mothers bothered me the most. Couldn't they give their campaign a rest for a week or two? There was plenty of local fundraising going on, & there they were, outraged about a minor zoning issue.

Hope you're doing OK & so glad your power is back.