Say it isn't so. Timboo's Bar, at Fifth & 11th, will be gone by year's end (HPS).  Jackie's, Smith's & O'Connors ("improvements" regardless): watch your backs.  You're all that's left of Fifth's old-school drinking establishments. 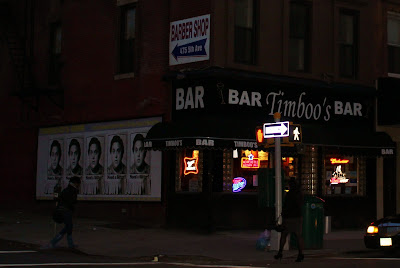 How sad it'll be to see the last of those jaunty, bubbling glasses up on the sign.  And below it, at the doorway, an elderly figure looking out, maybe with a Stetson & a fine array of medals, maybe with a cheery greeting & a sly taunt or two. With the OTB gone, and long before that, the old, grim Glasgow's deli, Timboo's was almost the last reminder of the block in the seventies & eighties, & it's hard to think of the corner any other way.  More recently I've been thinking of this un-fancy stretch as the land between Dreamy's & Sleepy's (the ugly stores that poetically man the block's borders on the other side).  I 've walked it so many thousands of times I do almost walk it in my sleep. I wonder what's next for this little world.

Posted by onemorefoldedsunset at Friday, December 02, 2011

Is it open through December? We should go and have a farewell drink there and document the place.

Well it might be nice to get a few people together. It's had its fair share of write-ups, but isn't the kind of place where I'd want to wave a camera around.